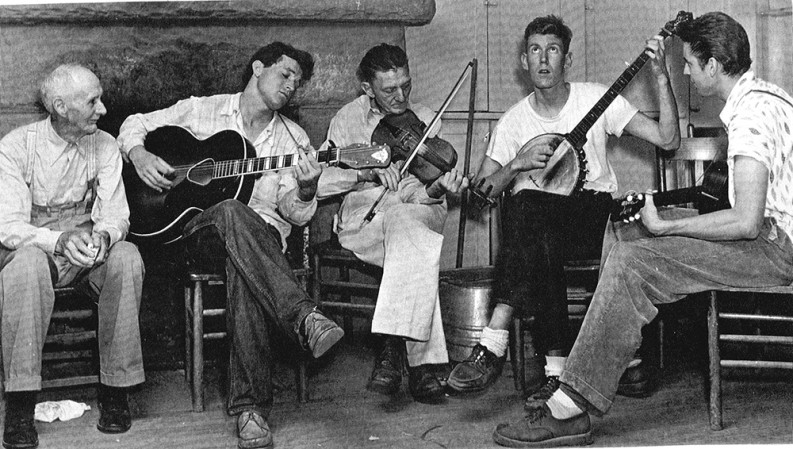 In the summer of 1953, folk singers Guy Carawan, Ramblin’ Jack Elliott, and Frank Hamilton lit out from New York City to take a trip through the South. Over six weeks, they traveled from the North Carolina coast to New Orleans, spending much of their time in the Appalachian mountains, hearing a lot of music and making some themselves.

Carawan lent his journal from the journey to folk-music scholar Ron Cohen, author of Rainbow Quest, a celebrated 2002 book about American folk music and culture. Cohen believes this trip was such a seminal event in the then burgeoning folk-music revival that he summarizes it in the book’s introduction, arguing that the trip sets the stage for all that was to follow in the 1950s and ’60s.

Recently, Guy’s wife Candie found a series of letters that Guy wrote to his girlfriend at the time. Candie compiled them in a manuscript and donated a copy to the Tennessee Archive of Moving Image and Sound. These letters offer a more detailed, intimate account of their travels and his thoughts while in the midst of the trip.

Carawan, at the time 26 years old and based in New York, wanted to visit a coastal farm in Mesic, N.C., where his father had grown up. From there he would explore the South, the source of so much of the music he loved and performed. He invited his 18-year-old friend Frank Hamilton along. While in a Harlem bar to hear Knoxville-born blues singer Brownie McGhee, they met Jack Elliott, who was also soon on board for the trip.

In Mesic, they encountered Carawan’s Uncle Claude and Aunt Nancy. Already the trio were faced with the contradictory culture they would repeatedly encounter on the trip. “It’s hard to reconcile their Jim Crow outlook with the wonderful qualities they have,” Carawan wrote. He wanted to record music from the African-American community, but his aunt warned him against it.

Stopping in Merry Point, N.C., they met union organizer Bill Levener, who convinced them to leave town immediately. A fish factory had been burned down recently and the three outsiders made good suspects, even though it was widely suspected that the owners, losing money because of a fishermen’s strike, had burned the factory themselves. This was not the last time they would be met with suspicion.

Low on funds, they tried busking in most towns they stopped in, but frequently police stopped them. At a revival, they were singled out by the preacher, threatened with damnation if they did not turn to Jesus. “We’ve been taken for everything from mountain hillbillies, Texas cowboys, country farmers, dust bowl refugees, to hoboes and sometimes city fellers,” Carawan wrote. They would often sleep on the ground or in their car, occasionally put up for the night by farmers or townspeople in barns or homes.

In Maces Springs, Va., they stayed with A.P. Carter in his “old torn down shack—full of old pictures, song sheets and books,” sleeping in a “bug-eaten bed.” It was a pitiful sight, but they had a splendid time making music with the “grand-daddy of all mountain and country folk singers.” Then on to Asheville, where they met with singing lawyer Bascom Lamar Lunsford, who had launched the Asheville Folk Festival in 1928. Lunsford was an influential figure for Carawan, but on meeting him, Carawan thought him a “reactionary aristocrat.” Lunsford wanted to know if the three men were Communists; he was galled to see that vocal leftist Pete Seeger wrote the liner notes to his just released Folkways album. They did play music with him and seemed to enjoy the experience, Lunsford singing “like an old mountain reprobate, full of glee and friendliness.”

In Gatlinburg they met Wiley Oakley, “a tall tale teller,” in his gift shop. In Nashville they visited the Grand Ole Opry and were impressed with both the talent and friendliness of many of the performers, especially String Bean, who gave Carawan money to repair his banjo head. Of Earl Scruggs he wrote, “Such a damn nice guy. … His wife just had a baby a half hour earlier. It was 6 a.m. We only slept three hours that night and that was in front of the radio station where his program was.” Carawan enjoyed the folk music in the Opry show, but writes of the commercial country music, “I’m really fed up with electric guitars—syrupy, slidey tones, full of corn and cliches—but for all that, sort of fun. It just never gets in my innards the way some folk music does.” He admitted that Roy Acuff was pretty good.

The seeds of Carawan’s 1957 visit to the Soviet Union were sown after watching Elia Kazan’s anti-Communist film “Man on a Tightrope” at Black Mountain College. Anti-Soviet sentiment was so high among the students and faculty that Carawan decided to one day see for himself what it was really like. He also got into an argument with poet Charles Olson and a teacher at the school, about the viability and artistic merit of the progressive folk-song movement.

Before his travels, Carawan seemed to have romantic, if not naive, ideas about the music and culture of the South. After spending time and playing music with its inhabitants, he began to see how complex and complicated Southern culture could be. Though he mostly reported on the friendliness and musical talent of his hosts, Carawan revealed that he did not always feel magnanimously toward them, at one point commenting on the “Erskine Caldwell kind of people and happenings” they encountered and describing a violent, drunken fight between the father and son of a family they stayed with.

Seeing progressive ideas thriving at the Highlander Folk School in Grundy County, Tenn., inspired Carawan to eventually take up residence as the school’s music director. Carawan was impressed upon meeting Highlander director Myles Horton and particularly taken with Claude Williams, a former fundamentalist preacher who became a union organizer and civil-rights activist and, as a result, was beaten by the Ku Klux Klan and booted out of the church.

“It’s encouraging to find a place like this in the South—carrying on its program and being well-liked in the community,” he wrote. “They’ve had a history of struggle against initial opposition … but have won some community support and protection. There’s a whole gang of wonderful people here.”

Inside the Vault features discoveries from the Knox County Public Library’s Tennessee Archive of Moving Image and Sound, a collection of film, video, music, and other media from around East Tennessee. TAMIS will celebrate the lives of Guy and Candie Carawan with music, artwork, and films at the East Tennessee History Center on Friday, April 10, from 6-9 p.m.