Midnight Bomber What Bombs at Midnight: 'S-T' - The Knoxville Mercury 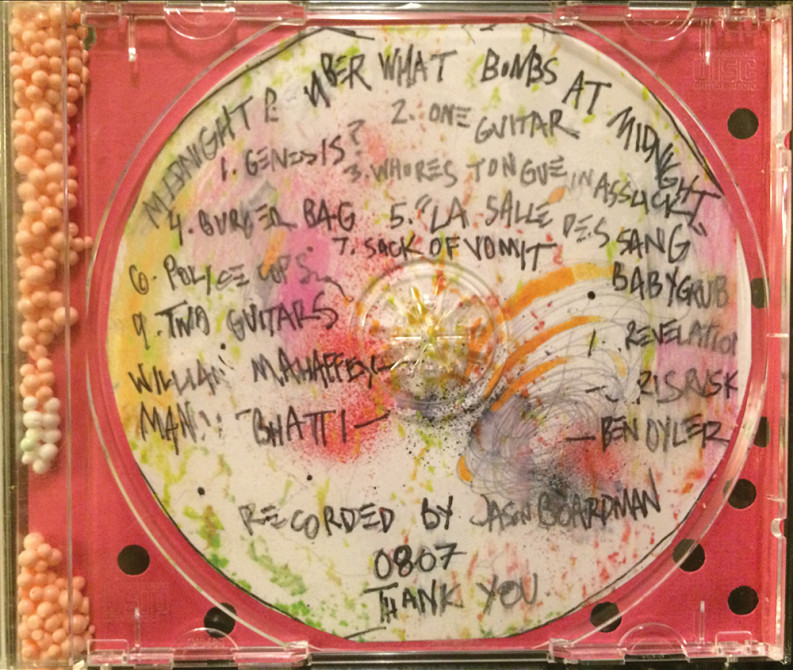 The scene centered around Knoxville’s Pilot Light hasn’t ever lacked for confrontational sounds, but no band ever stampeded the boundaries quite like the Midnight Bomber What Bombs at Midnight. Beginning with its very first shows in early 2006, Midnight Bomber What Bombs at Midnight unleashed a jaw-dropping mangle of free jazz and noise metal, which quickly came to incorporate surf, prog rock, and even carnival music, all carried across with both fury and goofy, self-aware wit. Any novelty stemming from the group’s shared members with pop mainstays Tenderhooks and Dixie Dirt disappeared as soon as Midnight Bomber plugged in; for 20 minutes at a time, there was only untethered id and the technical wizardry that sold it, from Chris Rusk’s schizoid drum precision to Manjit Bhatti’s saxophone squawk. After less than two years of stealing high-profile shows and a quietly self-released EP, Midnight Bomber played their last show in late 2007, and Knoxville’s been a little less dangerous ever since. Check out the full stream below of visit midnightbomber.bandcamp.com.

GUITARIST WILLIAM MAHAFFEY: The [Evil] Midnight Bomber What Bombs at Midnight is a character on The Tick. I’m not sure if anyone else really liked the name as much as me, but it was the one they disputed the least.

BASSIST/VOCALIST BEN OYLER: In terms of the capacity to realize written material or musical ideas—in both a technical and aesthetic sense—I don’t think I’ve ever played in a better band. When we weren’t being cranky and arguing about nonsense, we were able to create the music we wanted to make with few limitations. That is not to say that a lot of those ideas weren’t pretty sophomoric or just flat-out goofy.

MAHAFFEY: We all pushed ourselves and would often come up with parts and ideas that we weren’t technically able to do and had to work until we reached that skill level to be able to pull off the songs.

OYLER: We were trying to be gross and exaggerated. Everything was about exaggeration and difficulty in that band. Both for us and probably for our audience. It was a funny thing to play dumb fecal jokes against the elaborateness and complexity of some of the songs.

MAHAFFEY: Manjit and I did have some digestion problems on our tour though, so perhaps they manifested in the music because of that. … We recorded the album with Jason Boardman in our practice space. It was just the five of us there and I can’t really remember how long it took. Jason was a really good judge of where our energy was at when we were recording and would do things to get our energy up and get better performances out of us.

PRODUCER JASON BOARDMAN: They were definitely my favorite band in town while they were together. … I was just blown away that they could be so technically precise and so wild at the same time. Especially Manjit, who only started playing saxophone just before they got together. I first met him through Midnight Bomber and just assumed he’d been playing all his life.”

OYLER: I wouldn’t say that I especially liked making it, and I wasn’t—and am still not—totally happy with the result. I think some of those songs are great, but I would’ve liked to have applied more time and discipline to the recording process. … People responded well to the record, and Eric Lee’s artwork worked well, I think. One of the songs recently popped up on a mix that my wife had on her iPhone—I think it was “Burger Bag”—and it really blew my mind that we had written it. It’s just not a language I think in now.

RUSK: I am totally proud of it. Hear that drumming? Nice! I wish I could find a copy so I could listen to it again. Do you have one?

MAHAFFEY: There was a pretty good energy in the Knoxville scene at the time. There was us, Double Muslims, Woman and a few other groups that I thought created original and interesting music. I think people are still doing that, but I feel it was a better scene overall then. I think that any person might say that though. I’m just old, grumpy, and don’t understand these kids and their music today.

OYLER: Manjit had a really bizarre idea for a tape piece based on Nancy Kerrigan, who was apparently for him a lifelong emblem of sexual power. I really wished we had worked it up. Some of his sketchy ideas for it were bizarre and hilarious—maybe too much so for the rest of the band, which is definitely saying a lot.

RUSK: One of my favorite shows was when we trapped everyone in the Birdhouse and played the opening riff to Crazy Train for 20 minutes. Why did we do that?

OYLER: It was the first band that I played in that I felt like got the full sanction from a lot of smart local folks, and people still occasionally reference us, which feels great.

MAHAFFEY: Chris was a busy fellow and Manjit went to Germany for school so we thought we would just call it quits while we were ahead. … We tossed around the idea of getting back together a couple of years ago but we were all pretty busy, particularly Manjit, milking cows. I think that the idea of a little band like us reuniting is kind of silly and no one would really care. But for me, I would just enjoy playing those songs with that group of people again, and I don’t care what people would think or if anyone showed up. It would just be fun.

Ben Oyler works at Three Rivers Market and plays in Pleases. Chris Rusk works as a booking agent, drums for Royal Bangs and the Sniff, and fronts Ex-Gold. William Mahaffey is the director of the Knoxville Horror Film Festival. Manjit Bhatti works with his wife, Colleen Cruze Bhatti, on their peerless dairy farm, and was too busy milking cows to reminisce about his thrash jazz band.