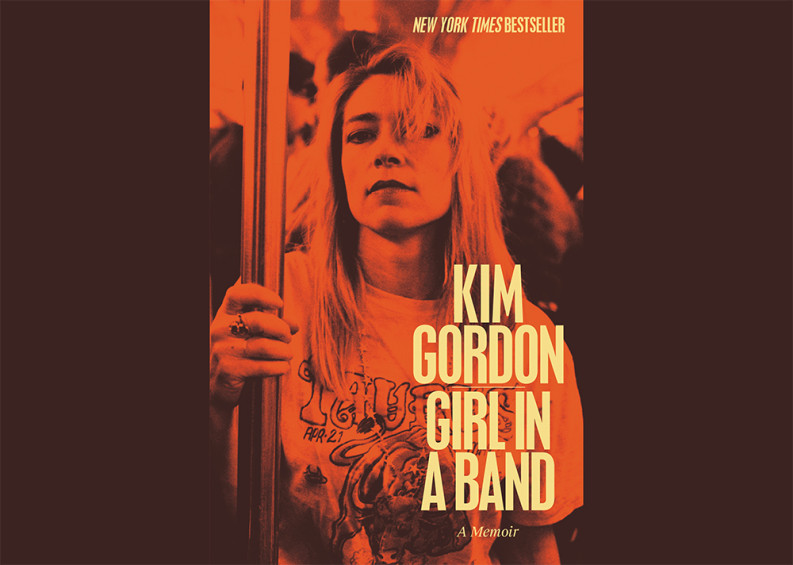 Among the photos scattered throughout Girl in a Band, Kim Gordon’s elliptical new memoir, is a rather striking one of her with Kurt Cobain. Gordon is speaking, her back to the camera, and Cobain, whose public face so often conveyed bitter irony, is staring at her with unguarded awe. Sonic Youth, the avant-rock band Gordon co-founded in New York in the early ’80s, was by then indie royalty and Gordon herself a kind of icon. Beautiful and mysterious, she anchored the band with her steady bass playing and projected endless cool from within the midst of the guitar storms unleashed by Lee Ranaldo and Gordon’s longtime husband, Thurston Moore.

Sonic Youth’s influence is difficult to overstate. Their early support of Nirvana and Pavement alone, to name just two of the now legendary groups that benefited from their mentorship, produced ripples that reach us to this day. The band was an agent of political change, too, advancing an unabashedly feminist world view that, in the early ’90s, thanks also to riot grrrl, D.C. hardcore, and other cresting movements, briefly became de rigueur. I had a dim memory of seeing a very pregnant Kim Gordon playing with Sonic Youth on TV. She mentions this in passing (turns out it was on Letterman) in a chapter on the formation of her clothing line, X-Girl, that reads as both fabulous and unglamorous—traveling to Tokyo for a fashion show with Sofia Coppola but also a 5-month-old baby—Gordon’s daughter, Coco—who won’t sleep through the night. It’s a tricky balance, and one Gordon ably sustains in the rock-lifestyles passages of the book.

Gordon grew up in Los Angeles, and even in her formative years future luminaries appear. Her high-school boyfriend is Danny Elfman, whose Simpsons theme song will echo through eternity, and after graduating she works for Larry Gagosian, assembling cheap frames for mass-produced prints. Gagosian would become one of the world’s most powerful art dealers, but at the time Gordon meets him he’s selling art books in the street. The figure who exerts the most control over her early life, however, and plays a significant role in shaping the cool exterior she will one day present to the world, is her older brother, Keller. Highly intelligent and “almost unbearably articulate,” Keller suffers a series of breakdowns and is ultimately diagnosed as schizophrenic.

“[M]aybe because he was so incessantly verbal, I turned into his opposite, his shadow—shy, sensitive, closed to the point where to overcome my own hypersensitivity, I had no choice but to turn fearless,” Gordon writes. Two pages earlier, she writes, of that shyness and sensitivity, that it’s as if she “can feel all the emotions swirling around a room. And believe me when I say that once you push past my persona, there aren’t any defenses there at all.”

This was the line—it comes early, on page 12—where I gave in to the book. I have always liked Sonic Youth more in theory than in practice and felt no great need to learn their origin story or parse the messy details of their split. But Gordon’s prose—fittingly, for a child of Los Angeles—is pure Didion cool, the perfect tool for her sociological and personal explorations. L.A. in the late ’60s has “a sense of apocalyptic expanse, of sidewalks and houses centipeding over mountains and going on forever.” Soon, of course, the scene shifts to New York, which often appears as two opposed entities: the crumbling metropolis of Gordon’s ’80s memories and the gleaming “city on steroids” it is today.

And then there is the divorce. It’s heartbreaking, really, and also utterly banal: Gordon’s accidental discovery of her husband’s much younger mistress, the anguished confrontations, tearful apologies, vows to stop followed by further betrayals. I’m not alone in having assumed Thurston Moore wasn’t the type to firebomb his marriage this way. But then, what do any of us know? I can tell you he was the major stumbling block to my fully embracing Sonic Youth. I guess I just never liked his voice. Kim Gordon’s voice, on the other hand—raw and vulnerable and still somehow reserved—I would gladly follow anywhere.