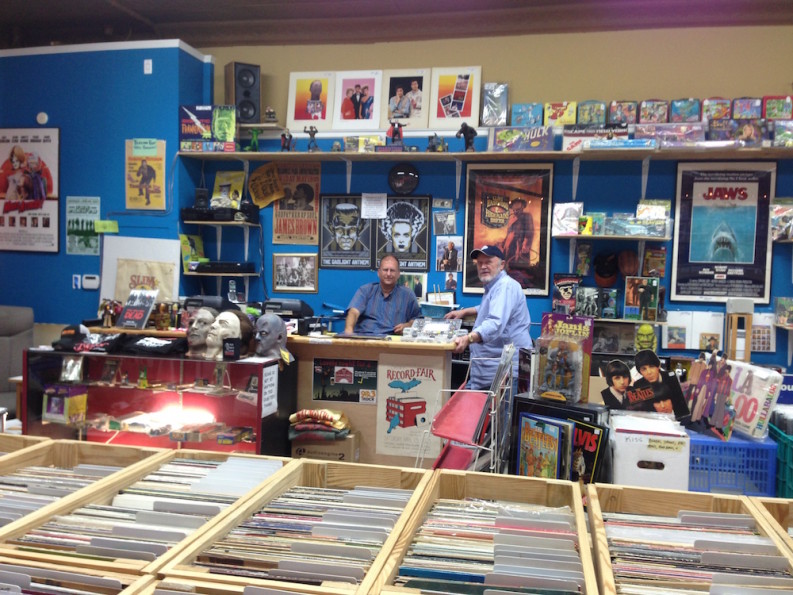 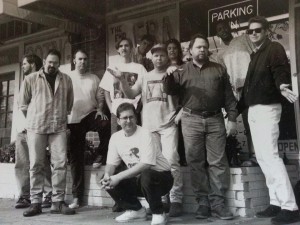 Here’s the full staff of Raven Records on Cumberland Avenue, shortly before owner Jay Nations shut the store down in 1995.

In 1985, a couple of years after graduating from the University of Tennessee with a degree in advertising, Jay Nations was stuck working at Circuit City and wondering what to do with himself. As fate would have it, the owner of a local record store on the Cumberland Avenue Strip made the unwise decision to import a pound of marijuana from Jamaica, which resulted in his imprisonment. Thus, a new career was born: Nations joined the store as a temporary manager and then eventually bought it and renamed it Raven Records.

His refashioned shop wasn’t just a place to buy records—Raven soon became a nexus for the Knoxville music scene, a place where local musicians could not only sell their records and promote their shows but also find work behind the counter. There were heady days of success (eventually moving to a much larger location on the Strip in 1991) and failure (opening Raven West in West Knoxville); he shut down the store in 1994 at the depths of the vinyl market. Nations didn’t give up on vinyl, though; he continued to ply his trade, first online and then at record shows around the country. Finally, in 2011, as new LPs became increasingly popular, Nations went back to retail, opening Raven Records & Rarities with business partner/movie memorabilia magnate Jack Stiles.

(Stiles quit his corporate job as soon as Nations floated the idea of starting a shop together: “I was at the lowest corporate low I could get—I was fed up with dealing with them at the time. In fact, the day before, I had thrown the keys at a general manager. So Jay called at the absolute right time.”)

Next week, Nations and Stiles will be celebrating Raven’s 30-year legacy as a local music-scene institution. On Wednesday, April 15, starting at 6 p.m., at Relix Variety Theatre, they’ll be holding a Raven movie night, featuring a documentary on the ’80s Knoxville music scene (and Raven’s role in it) by Brad Reeves; David Keith’s opus The Curse; the Morristown-shot Evil Dead; and their mutual favorite, Blue Velvet. On Thursday, April 16, starting at 6:30 p.m., at Relix Variety Theatre, Raven’s band party will showcase the musical talents of former Raven employees: Todd Steed and the Suns of Phere, Tina Tarmac and the Burns, featuring Sara Washington, and Itchy and the Hater Tots, featuring Brian Waldschlager. It’s no coincidence that this all goes down the same week as Record Store Day (Saturday, April 18), the annual celebration/sales orgy for independent record stores.

We recently chatted with Nations over lunch at Pete’s about his life in vinyl:

When you opened Raven, what was the record-shop scene like back in the mid-’80s?
It was mostly chain stores—it was Turtle’s and Cat’s and me. There weren’t any other indies. There weren’t any! It’s hard to think of that now, ‘cause there’s like five indies now. I was all alone. It was so freakin’ great! I had a monopoly there for a while as far as buying and selling records, because CDs really started kicking in around ’87 and people were panic-selling records and panic-buying records at the same time. So I could buy a crate of records in the morning and have them paid for by the end of the day. It was a crazy time.

Were you a record collector yourself before getting into the business?
I was always the guy people would say, “He’s got the biggest record collection.” My record collecting started when I was about 16. I grew up in Kingsport and I got set up with a little stereo for my birthday, so I went up to the Montgomery Ward record department and brought home In the Court of the Crimson King [by King Crimson], which had the craziest album cover of anything in there. I didn’t know a thing about it, but I said, “I’m going to take a chance on this.” So that’s more of an example where the record bought me, and I got caught into it and totally absorbed it.

Do you still buy records based on their cover art?
Occasionally. I think that’s what you’re supposed to do. People should do that! I order stuff from the catalogs sometimes, and if the name of a group sounds intriguing, I think we ought to have that in the shop even though I don’t know a thing about them.

Do you ever have a record come into the shop that you just have to keep for yourself?
A guy came in with a banana cover of the first Velvet Underground album. A little piece of the banana had peeled off but it was intact and it was in mono. He knew what it was and we came up with a price, and I said, “I’m keeping that one.” One I discovered in a collection later was a mono Rolling Stones’ Sticky Fingers, which I think was the last mono mix that they put out and it was only on promo, so that’s kind of a key piece, because I really love the Stones.

Do you ever collect records purely for their collectibility?
For me, I always prefer to have the best version of a record. So the new Led Zeppelin records, which were remastered by Jimmy Page himself—I had the Classic Records label editions, which were 200 gram, all-analog production, limited editions. Fantastic recordings! But the new ones are better, so I’m selling off all my old ones. I had German copies, UK copies, original copies—Robert Ludwig mastered some of the original Led Zeppelin records and they were so “hot” that cheap needles would jump out of the grooves and people thought they were defective. But they were just recorded extremely well and play good on modern equipment, so they’re highly sought after. I’m even sell that one because the new ones sound so much better, I think.

Did you ever privately go digital?
What the hell are you talking about?! I ripped all my CDs and they’re all on a little hard drive the size of a packet of cigarettes. I don’t care about CDs—they’re something to hear in the background.

What are the advantages to a vinyl record?
The way it looks, the way it sounds, and the engagement of it. Saturday morning, I don’t have anything to do for a few hours, I crank up my tube amp, put some records on. And sometimes the whole day will go by.

Is it getting harder to find stuff now that collecting memorabilia and records is more popular?
It’s a little more of a challenge, plus people want more new vinyl, so I have to buy more low-margin stuff. And if you buy the wrong stuff, you have a lot of dollars tied up in stuff that’s not working for you. But I think vinyl’s going to stick around—if the damn industry doesn’t shoot themselves in the foot as they always consistently do by making stuff too expensive or too limited or not high enough quality. In my opinion, you ought to be able to walk in and buy a brand-new record for $15 consistently all day long. But they price them so that wholesale on a lot of stuff is $18, so you’ve got to sell it for $25 or a little less.

How did you originally come up with your logo?
Stan Johnson designed the bird part of the logo that we’re using now, which was inspired by Thrush Mufflers. When I was kid, these stickers of hot rod stuff was just the thing if you wanted a cool sticker to go on your locker. So now we’ve got the raven that kind of looks like a ’60s throwback, and then the logo itself was designed by Rand Cabus, who has his own shop in Roswell, Ga. now and he’s done real well, too.

While you’re celebrating Raven Records itself, you’ve also sort of been the Johnny Appleseed of record stores.
I want to celebrate all the other shops in town, too. There’s enough room for all of us, obviously. I’m friends with everybody. The cool thing is that every one of them used to be my customers. [Disc Exchange owner] Allan Miller used to come in on his bike, and he would quiz the people at Son of Raven: “How much do you pay for CDs? Where do you get them?” Next thing I know he has a shop up on Chapman. Mike Armstrong was one of my best customers and he opened his own shop with Mariah [Lost and Found Records]. Matt Adkisson at Basement Records, when we were getting ready to move from our Bearden location, I had 5,000 records I was just sick of looking at, so I made him a deal, and then he opens up a shop. And Brian at Wild Honey—I knew him back in the day. He was a quiet kid, and he’s built up a big eBay presence and we did a lot of swapping, so I’ve known him forever, too.

Record Store Day
Saturday, April 18
This year’s bacchanalia of limited-edition physical media is being celebrated at no less than six Knoxville locations: Basement Records, Disc Exchange, Lost and Found Records, McKay’s, Raven Records & Rarities, and Wild Honey Records. A couple of shops are taking it to 11 with live music performances: