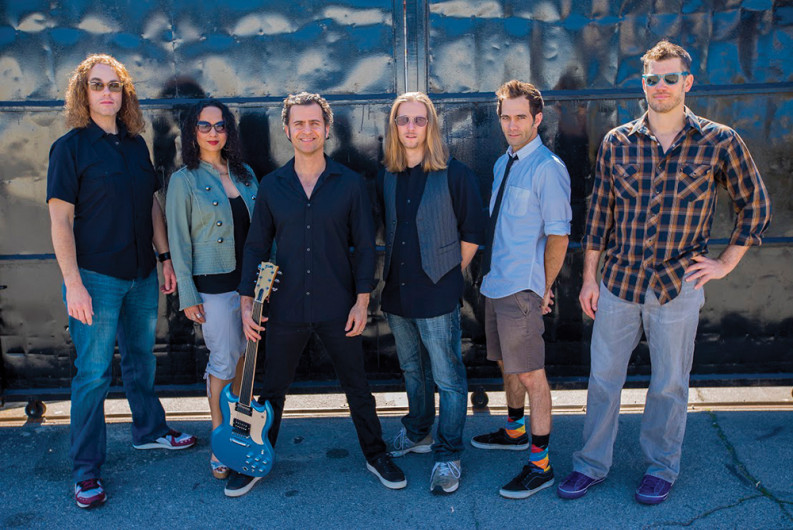 “This is not nostalgic music—this is music from the future,” says Dweezil Zappa. He’s referring to the compositions of his father, Frank—the innovative guitarist, bandleader, and producer who recorded roughly 100 albums before dying of prostate cancer in 1993. For the past nine years, Dweezil has been paying tribute to Frank’s sprawling catalog through a series of tours dubbed Zappa Plays Zappa, exposing his dad’s material—a mix of prog rock, jazz, classical, musique concrete, and unclassifiable experimentation—to a new generation salivating for the sonically weird. The band’s latest trek features a full-album performance of 1975’s One Size Fits All, one of the most iconic Zappa albums—and Dweezil’s excited about bringing these idiosyncratic songs back to life.

“It is a favorite record of mine, as well as a fan favorite,” says the guitarist, commenting on the album’s blend of virtuosity, melody, and humor. “With it being the 40th anniversary, I’d like to shine a light on that to say, ‘Look, this stuff is 40 years old, and it still sounds like nothing on the radio.’”

No One Size track—really, no Zappa song, period—better exemplifies that brilliant chaos than “Inca Roads,” a multi-tiered, UFO-themed epic that evolves from a marimba-led groove to complex rhythmic sections to a phaser-heavy guitar solo that ranks among Frank’s most melodic. On the record, it clocks at just under nine minutes—onstage, the piece can often run up to 15.

“It’s a hallmark song in terms of showcasing Frank’s specific strengths as an artist and composer,” Zappa says. “In that one song, you have these difficult interludes with this very rhythmically diverse, intervallic melody. But then on top of all of those challenges, you have the improv sections. The genius of the way that song is crafted, in a live situation, because of the improvisational sections, every time that song is played, it’s going to be different. You can hear that song 100 times, and it’s never going to be the same version. That’s the genius of Frank’s music throughout his records—he’s created this living, breathing catalog where, when the music is performed live, it’s going to be different no matter what.”

Critics have always been hot and cold with the Zappa discography. (For a good laugh and/or eyeroll, check out Robert Christgau’s take on the jazz-fusion masterpiece Hot Rats.) But Dweezil’s tasteful touring project—along with a recent massive Zappa reissue campaign—has helped bring about a renewed appreciation for his father’s work. The Zappa Plays Zappa tours serve as a perfect primer for newcomers, compiling his most sonically savory songs. But the band brings a fresh vitality to this music, offering Dweezil a platform to showcase his formidable guitar skills.

For the unacquainted, it’s easy to look at Dweezil—the son of a divisive music icon—as a musician of privilege, a product of lucky genetics. But he’s taken his own weird, winding path to rock stardom. As a child guitarist, he learned scales and exercises from legends like Eddie Van Halen and Steve Vai, and he recorded his first single, 1982’s solo-heavy “My Mother Is a Space Cadet,” at age 12. Later in the decade, he found work as a VJ on MTV (the very network his father so despised) and took a few bit parts in Hollywood films like Pretty in Pink. He eventually returned to his first passion with his 1986 debut LP, Havin’ a Bad Day, and four subsequent solo albums of virtuoso hard rock.

Inspired by the success of Zappa Plays Zappa and the further development of his guitar technique, Dweezil composed his upcoming sixth record as a summation of all his formative influences. Funded by an ongoing PledgeMusic campaign and set for a May release, the album ventures from expansive prog rock to guitar renditions of pieces by the Bulgarian Women’s Choir to the Arabic-metal mania of “Dragon Master,” for which he composed music based on “ridiculous heavy-metal lyrics” written by his dad.

“There’s a little story that goes through the whole thing—not that it’s a concept album,” he says of the release. “I wanted to make a record where I could retrace the steps of what got me interested in music—not only for guitar and music elements but even for the sound of certain things that are on records that I grew up liking. So there’s some ’60s-sounding stuff, some ’70s-sounding stuff, some modern stuff. But it’s all cohesive because all the songs feel like they belong together, and it’s a collection of all the things I really like.”

For now, with Zappa Plays Zappa, Dweezil’s career is moving forward by looking back. By examining his roots, he’s discovering where he could grow.

Zappa Plays Zappa plays at the Bijou Theatre on Wednesday, April 15, at 8 p.m.