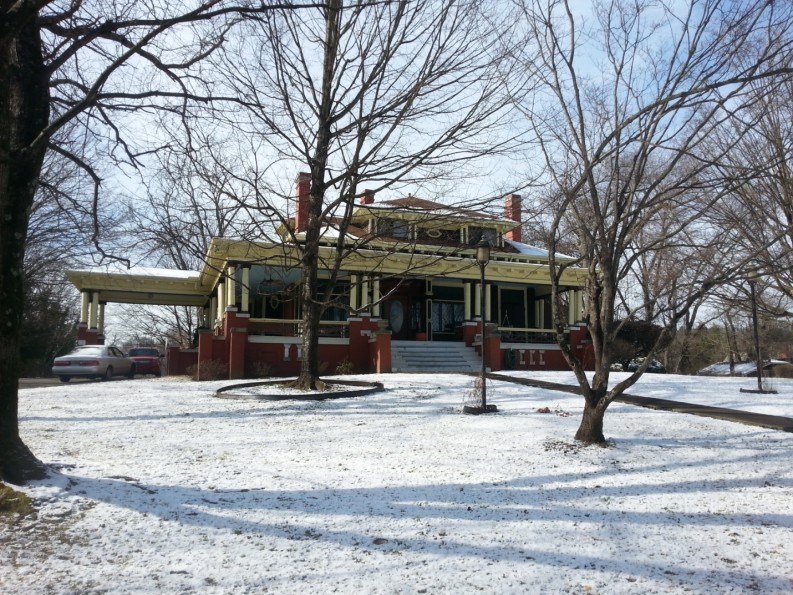 A century-old home many consider the most beautiful on Broadway may be doomed to demolition unless someone is willing to match the $1.27 million offer recently made by a developer.

The Craftsman house at 2921 Broadway, which was owned for more than 50 years by former Knoxville city councilman Paul Howard, is one of the last homes on a mostly commercial stretch of North Broadway and is not protected by historic zoning. Howard died in 2014, and his will requires the sale and division of all his property among his heirs.

Howard’s son Tim Howard, a retired developer, says the family has signed a non-legally binding letter of intent to negotiate for the sale of the house with a Chattanooga developer. The developer is interested in demolishing the house to build a commercial building that would potentially be leased to a prominent national retail food chain such as Walmart Neighborhood Market. Another house next door owned by a family member would not be part of the deal.

Centerpointe Church next door on North Broadway has signed an agreement with the developer to sell the church property for about $2.3 million, contingent upon the sale of the Howard property next door, says Centerpointe pastor Jim Millirons. He says even if the deal falls through, he thinks that the church may still put the building up for sale.

“The sale of the property affords the church a tremendous opportunity of ministry in the inner city,” he says, emphasizing that the church will not leave the neighborhood. He says Centrepoint plans to open multiple campuses and a new ministry center. In May the church will begin holding Sunday worship services at Middle Springs Middle School, he says, and the congregation is studying other potential worship spaces. “We definitely feel a calling to be able to minister to the neighborhoods of Edgewood, Lincoln Park, and Oakwood,” Millirons says.

The Howards are in an earlier stage of negotiation than Centerpointe.  Knox Heritage is helping Tim Howard get the word out that the family would like to find another buyer willing to match the developer’s price but keep the house intact.

The property includes 2.4 acres with gardens, a gazebo, and lit tennis courts. The home was designed by University of Tennessee graduate Charles Hayes for his brother, building contractor Lynn Hayes, and built around 1910. Tim Howard says he has seen a picture of a horse-drawn carriage in its portico.

His father started renting the house about 1948 and purchased it in the 1960s, Howard says. Paul Howard made improvements such as adding extensive oak paneling inside and recently won a Knox Heritage award for his maintenance of the home, which even has two kitchens.

Tim Howard says he and his two surviving brothers got along but were not close at the time his father wrote his will. “I think Dad was concerned rather than to take a chance on families getting in a fight, it was best to sell and just disperse the funds,” he says. The youngest Howard brother lived in the house until a few months ago. But Tim Howard says none of the heirs is both willing and able to buy the house from the estate.

“I don’t want to see Dad’s home torn down, and I’d like to see his legacy move forward,” Tim Howard says, recalling that his father’s construction business handled a UT hospital addition and several hotels built during the 1982 World’s Fair.

“My heart is to see a Christian nonprofit, if possible, buy it and the church next door to allow both to be used for the Lord’s work,” Howard says. He says Knox Heritage asked the family to donate it but “we can’t do that.” He was approached by a startup Christian nonprofit only hours after WBIR aired a story about the house this week, but he hasn’t had a chance to talk with the group. Other nonprofits that operate through his church are unable to pay the asking price, he says.

Neither can Knox Heritage, says executive director Kim Trent, but she wants to see the home endure. She says the Howard family has about six or seven months to find another buyer.

“It’s an iconic structure on Broadway,” she says, noting that the area was once residential before being slowly gobbled by commercial development.

“The response on our Facebook page has just blown up,” says Trent, who posted information about the house Monday. “People in North Knoxville are very upset that this might be happening.”

Facebook commenter Jimmy Ryan wrote: “This is completely absurd. This developer has to lack any form of vision or creativity in order to pick one of the most beautiful pieces of architecture along all of Broadway, offer $1.27 million to demolish it, and completely overlook the vast amount of vacant properties along Broadway that are ripe for development.” He and others suggested better locations in the same area of North Broadway for a grocery store, such as the former Broadway Sound site.

Trent says City Council is considering an ordinance that would delay demolitions of historic buildings, and depending on if and when it passes, it might be a way to buy time to come up with an alternative to tearing down the house.

Anyone interested in purchasing the property or learning more can contact Tim Howard at save2921broadway@gmail.com. To read more about the features of the house visit the Knox Heritage website at knoxheritage.org.