'Furious 7' Lives Up to Its Title, Despite Frenetic Ambition - The Knoxville Mercury 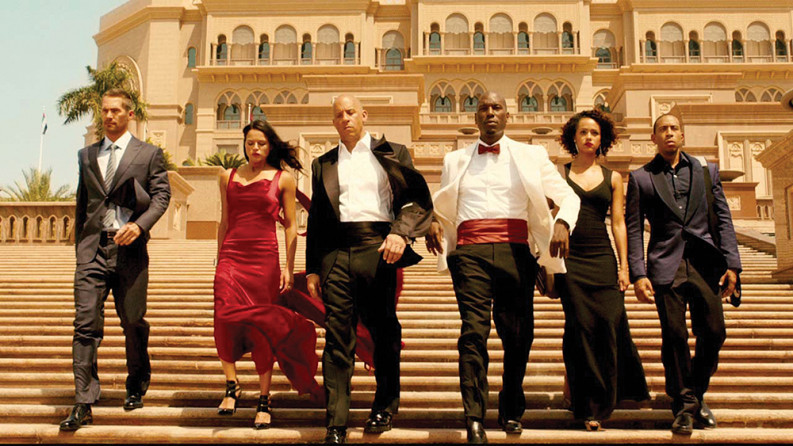 The most bonkers of Furious 7’s many bonkers moments hinges, naturally, on a bonkers car. How bonkers is it? It is so bonkers that it comes with people; If you’re good for the $3.4 million asking price, you get a team of “flying doctors” who can be instantly mobilized to repair your car anywhere in the world if, say, Vin Diesel steals it and drives it through some plate-glass windows while hopping it from one of the Etihab Towers to the next. It’s got seats stitched with gold and headlights lined with diamonds.

I mention this because it’s both a plot point and a perfect metaphor for the movie as a whole. The latest installment in the long-running, high-grossing franchise is an exercise in manic overindulgence that is by turns exhilarating and numbing. It’s the most uneven entry since the 2009 reboot, and, for me, the jaw-dropping highs don’t quite cancel out the ham-fisted lows. But it delivers spectacle on a scale that’s tough to match, and offers a classy and heartfelt send-off for late co-star Paul Walker.

If all of that makes sense to you, you’re a franchise fan and you’re in good hands. Otherwise, you’re just here for the car chases and there’s a rocky road ahead of you. Director James Wan, best known for outstanding, slow-burn shockers such as Insidious and The Conjuring (and, okay, Saw), takes over from series regular Justin Lin, and he occasionally finds wonderful, unexpected beats in the movie’s neck-snapping chaos.

Most of those moments involve Furious 7’s central gimmick. Early in the flick, Brian tells his son that cars don’t fly. That is, of course, a call to arms for Wan’s army of stunt performers and effects artists. Brian’s lack of imagination is both setup and punch line for the bulk of Furious 7’s most outlandish—and dopily satisfying—action sequences. Cars drop from airplanes, hurtle over cliffs, and sail between the aforementioned Abu Dhabi towers as the globe-trotting gang pursue their targets from the mountains of Azerbaijan to the streets of Los Angeles.

It’s not just the cars that defy gravity. Thanks to the addition of Thai martial artist Tony Jaa (Ong-Bak) to the admittedly bloated cast, Furious 7 supplements its vehicular madness with acrobatic fight scenes; some of its coolest moments belong to Jaa, who runs up walls and spits out scenery as a snarling (if dramatically superfluous) heavy.

About that cast, though: There are just too many people doing too many ridiculous things for far too long, and the movie suffers for it. Statham is a lot of fun as a homicidal supervillain, and Kurt Russell classes up the joint as a shadowy U.S. government agent known only as “Mr. Nobody.” But once you add in a completely wasted Djimon Hounsou as yet another villain and likable Game of Thrones vet Nathalie Emmanuel as an imperiled hacker in need of rescuing, the central revenge plot becomes so diluted that the eventual third-act smackdown is less than satisfying. It’s fun to watch bad guys get punched with muscle cars, but it’s helpful if we can remember why we’re mad at them in the first place.

That is, until its final moments, when Furious 7 gets around to the elephant in the room: the awful death of Walker during a break halfway through production. It’s a loss that is dealt with seamlessly throughout the movie, using unseen footage from previous installments, the casting of Walker’s brothers as stand-ins, and some mostly undetectable digital sleight of hand. But after all the heavies have been dispatched, Wan and co. switch gears for a flawless and incredibly moving send-off that offers both genuine emotion and dramatic heft. Good luck getting through it with dry eyes.

To be honest, I prefer the low-rent efficiency of the first installment to the delirious one-upmanship that is taking over the series. But I’ll still buckle up for the almost guaranteed eighth entry, in hopes that it’ll pare down the cast and put a little more rubber on the road.