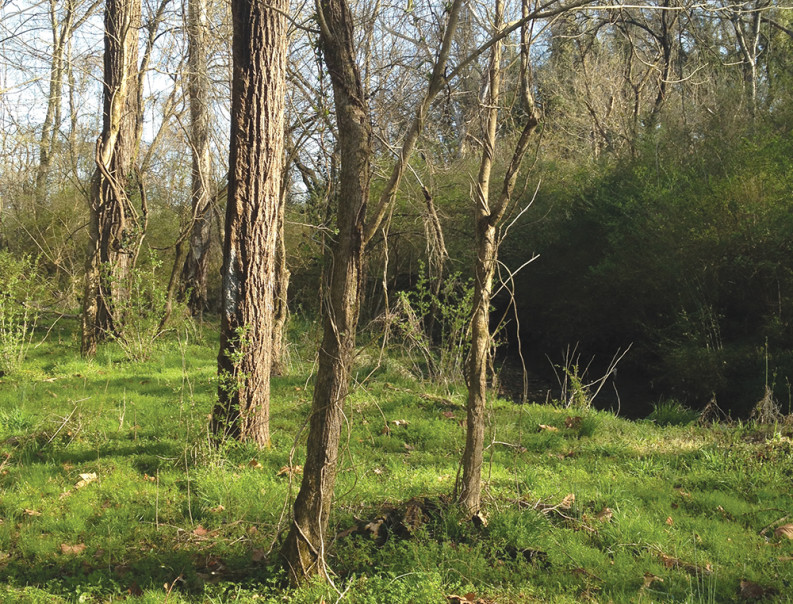 Daily Street is a narrow, unstriped road running north and south through East Knoxville. As I turn off Brooks Avenue onto Daily, a neighborhood of unassuming ranch-style houses lies to the left. On the other side of the road, a dense wilderness of invasive privet and bush honeysuckle hides Williams Creek from sight.

In 2003, the Tennessee Clean Water Network, a non-profit corporation that advocates for clean-water issues, sued KUB for overflowing sewers contaminating Williams Creek. To avoid going to court and paying heavy fines, KUB agreed to fix leaky sewer lines in the area, and help with TCWN’s project to buy and restore the forest in the Williams Creek watershed. The wooded corridor surrounding Williams Creek had been an illegal dump site for years, invasive shrubs ran riot, and the creek was the most polluted creek in Knox County.

Through grants and donations, TCWN was able to buy 21 lots and deed them to the city, creating 5 acres of new parkland. In 2013, TCWN hired the Whistlepig Farms herd of goats to enact a program of invasive plant removal. Voracious and persistent foragers, goats will eat almost any plant down to the ground.

Last year TCWN closed on several more wooded lots, increasing the area of the Williams Creek Urban Forest to 10 acres. The goats, which run the property during the warm months, will be returning this spring. TCWN Executive Director Renee Hoyos hopes to negotiate an unprecedented deal with neighbors to allow the goats into privately-owned yards to feast on kudzu that jumps the city property line.

From the highest part of Daily Street, the view across the valley is vast and inspires a sense of awe that all this green lies so close to the heart of downtown. A pair of crows chase a giant bird of prey through the tree branches of the newest addition to the urban forest, saved from future development.

Down the hill toward the creek, the grazing goats have cleared the understory growth enough to ease walking through the woods. Near the water, a lush carpet of grass spreads out beneath the bare branches of large hardwoods. A clump of daffodils blooms near an old shoe sticking out of the ground. The water sparkles in the sunshine, but Williams Creek remains on Tennessee’s list of impaired waterways for habitat alteration and E. coli contamination.

Removing Williams Creek from the bad list will be fraught with challenges. West of Daily Street, a troubling new invasive has been found. Japanese knotweed, a nearly unkillable shrub with a massive root system, is the Xenomorph of invasive species. Dense mats destroy ecosystems by crowding out native plants and choking waterways, leading to flooding. Incredibly tough, knotweed is resilient to grazing: the goats can’t take it out.

Despite the concrete barriers closing part of Daily Street to vehicles, people still use the place as a dump site. Tires are piled defiantly at the base of a “No Dumping” sign. There are no indications that this land is now a public city park. The “No Dumping” signs aren’t enough of a deterrent because there is no story to replace the long-held idea of the dump. I had the thought that just a sign reading “Williams Creek Urban Forest” may be more effective.

Community discussions about building the Williams Creek Greenway will begin this spring. This project is essential as East Knoxville has a low percentage of parks and greenways compared to the rest of the city. The area has improved, but the park is a work in progress.

Recently, Hoyos met a man on the creek bank teaching his boys to catch crawdads.

“Have you found any yet?” she asked. The Tennessee Department of Environment and Conservation assesses stream health partly though surveys of aquatic life.

He said he hadn’t caught any crawdads yet, but he had seen their holes in the bank.

The urban forest was never intended to be a recreational park with swings and slides; it’s a so-called passive park. To Hoyos, this man and his boys were using the park in exactly the right way.

“That’s the point of making these places accessible,” says Hoyos, “It is not my park, even though I raised $300,000 to support it—it belongs to the city.”

As public land, it belongs to all of us. On April 20 at 11 a.m., TCWN is hosting a creek cleanup, with volunteers meeting at Daily Street.