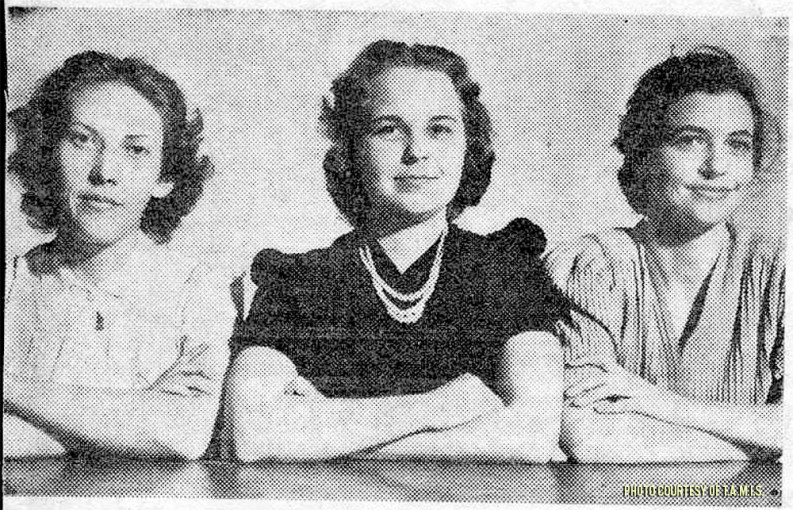 If you’re a parent, kindergarten teacher, children’s librarian, or golden-oldies fan, you might know the song “Three Little Fishies.” You might not know—few people do—that it was written by three sorority sisters from Knoxville.

The novelty song was a smash hit in 1939, with no fewer than eight versions recorded that year, including one by the Glenn Miller Orchestra. Despite its nonsense baby-talk lyrics, it has remained an oddly enduring classic, with versions popping up every few years from acts as diverse as the Andrews Sisters, Homer and Jethro, the Three Stooges, Spike Jones, Dr. Hook, Ray Stevens, Maria Maldaur, and the Muppets. The song bears a copyright crediting Horace Kirby “Saxie” Dowell as composer, but he took the song from University of Tennessee Zeta Tau Alpha sorority sisters Mary Elizabeth Bomar, Josephine “Jo” Carringer, and Bernice Idins.

Dowell was a saxophone player and singer in Hal Kemp’s band when they played Knoxville in February 1939. He somehow ended up riding in a car to a breakfast with the three sorority sisters, where they taught him their song “Fish Talk.” In late March, Kemp’s orchestra recorded “Three Little Fishies,” with vocals by the aptly named Smoothies. Kay Kyser’s version soon followed, spending nine weeks at number one on the Billboard charts. Dowell was so emboldened by the song’s success that he soon struck out on his own as a bandleader, but not before he was contacted by the UT trio’s lawyer.

“We sang the song all last summer, but we sang it once too often when we sang it to Saxie Dowell when he was here in February,” Carringer told a reporter at the time. Dowell, or at least his lawyers, didn’t contest the issue, and sent a check to buy the rights to the song. The amount isn’t known; Carringer said only that it was “much more than $100.” The women did not earn any royalties for what went on to become quite a moneymaker.

The sisters did a little borrowing themselves, taking many of the lyrics for their tune from the English nursery rhyme “Over in the Meadow,” which also has uncertain authorship.

After cashing Dowell’s check, Carringer and her new songwriting partner, Betty Lynn, took an extended vacation to New York, where they made contact with a publishing firm. Not long after returning to Knoxville, they sold “I Want a Hat With Cherries” to popular bandleader Larry Clinton. A contract was drawn up on a soup-stained napkin in an off-campus dining hall, which allowed Carringer and Lynn to retain copyright and receive royalties. The duo wrote three sets of lyrics, and Clinton found the one they preferred so naughty that he borrowed from each to assemble his version. Carringer reportedly “took a duck fit” when she heard Clinton’s version, thinking him far too prudish.

Carringer and Lynn also worked up a few songs for Ted Lewis’s December 1940 appearance at the Bijou Theatre, but it’s not known if they actually performed the songs. At any rate, they don’t appear to have been published or recorded. Mel Foree bought “Entertain Me” from them in 1941, and that seems to have been the last song the duo sold. (Foree was friends with WNOX’s Lowell Blanchard and songwriter Arthur Q. Smith. He became Nashville’s first full-time song-plugger.)

Also in 1941, Carringer married UT quarterback Buist “Buzz” Warren, who has the distinction of being one of the 11 Vols who played in the Orange, Rose, and Sugar bowls. (You can see footage of this 1941 Sugar Bowl at the TAMIS Vimeo channel.)

Newspaper and first-hand accounts suggest Jo Carringer was a lively character. She entered UT at the age of 16 and was an outgoing member of ZTA. One of her good friends was Jim Thompson’s daughter Margaret, and they can be seen in a film clip Thompson shot on their graduation day. In the film, Carringer is barely able to stand still as her portrait is taken, smirking and sticking out her tongue. Her son Robert Warren, who today lives in Winston-Salem, N.C., says he remembers her singing “Three Little Fishies” to him and his sister, but she didn’t talk much about her brief career as a songwriter. But his mom and dad did speak positively about their good old college days.

“They had a lot of fun, and the years they were in college were a great time to be at UT,” Warren says. “Then the war came along and dampened everyone’s spirits.”