Inside the Boyds’ Jig & Reel - The Knoxville Mercury

See Also: Who Is Randy Boyd? 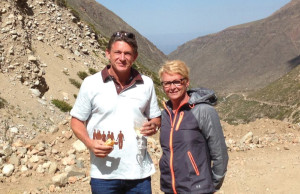 There seems to be an opposites-attract synergy at work where Randy Boyd and his wife Jenny are concerned. Though he doesn’t necessarily seek out publicity, Boyd is eminently comfortable when the spotlight shines in his direction. He amiably recounts the story of how he and his wife first met, in a cheesy ’80-era West Knoxville disco warehouse called Tony’s VIP, which neither of them were prone to frequent with any regularity.

“That was probably the only time she ever saw me dance, and it was the only time I think I’ve seen her drink a beer,” he says. “So we sort of connected under false pretenses.”

Jenny Boyd, when asked, replies politely that the story of their first meeting should not be offered up for public consideration. “We’re very different people,” she says. “I’m a very private person. I don’t like the limelight.”

She does allow that on first blush, she thought her future spouse “was very smart, and a good-looking guy, with a lot on the ball.”

Despite their differences when it comes to publicity, the couple have been married 30 years, having celebrated their anniversary in March of this year. Together, they share a life that includes two dogs (Spanky and Oscar); two cats (Sebastian and Wolfgang, named after German composers); and two humans, in sons Harrison (21) and Thomas (26). Thomas Boyd is a musician, and has been a fixture on the local scene since graduating high school, with his most recent project being the indie rock outfit Oh No Fiasco.

The couple also own a club together, Boyd’s Jig & Reel in the Old City, a nod to both Boyd’s Scottish roots and Jenny’s love of music. As Boyd tells it, son Thomas wanted violin lessons at age 7. He chucked the violin within two weeks, in favor of electric bass, but mom stuck with it.

Years later, on a trip to Scotland (Randy says there’s a Boyd family castle back in the mother country, which they’ve visited on a handful of occasions), Jenny met a small-town fiddle teacher in a local pub. She came back that same summer for fiddle lessons, held upstairs at the pub, followed by evenings spent in the pub itself, with the students playing traditional songs in-the-round for the local tavern regulars.

“People from the community would come in, sit around the table and call out songs,” Randy Boyd says. “And people like me, with no talent, could just sit on the side, drink beer and eat pie of some sort. We came back home thinking, wow, wouldn’t it be great if Knoxville had a place like that?”

Not too much later, during a stroll through the Old City, Boyd noted that the Old Manhattan’s space at the corner of Jackson and Central was vacant. “We thought it would be a great place for Jenny to play, that maybe we could rent it one night a week,” he says.

But the building was for sale, and not for rent. Having decided to take the plunge and purchase it outright, Boyd says he was hit with another unhappy surprise. “The $60,000 to renovate the building turned out to be about 20 times that,” he says. “I ended up winning a historic preservation award, but it was definitely never part of the plan to do that.”

Nonetheless, Boyd says having the club has been worth the expense and effort. “There are a number of ways of measuring success, and number one is the wife happiness measure,” he laughs. “And she loves it.”

Jenny oversees the Jig & Reel, and plays there a couple nights a week at the Tuesday “hillbilly jam” and again on Thursday, which alternates between Scottish or Irish music sessions. “We love the place, and our customers seem to love the place,” Randy says. “It’s so comfortable, almost like your living room.”

There may be a more extensive Boyd presence in the Old City soon enough. Boyd now owns the building that formerly housed Patrick Sullivan’s, catty-corner to Jig & Reel in the heart of the Old City, and he says plans are afoot for a new restaurant or night spot there. Son Thomas, meanwhile, has aspirations of opening a wine bar and cellar in the old John H. Daniels building on Jackson Avenue.