Frussie’s Makes Its Move—Across the River - The Knoxville Mercury 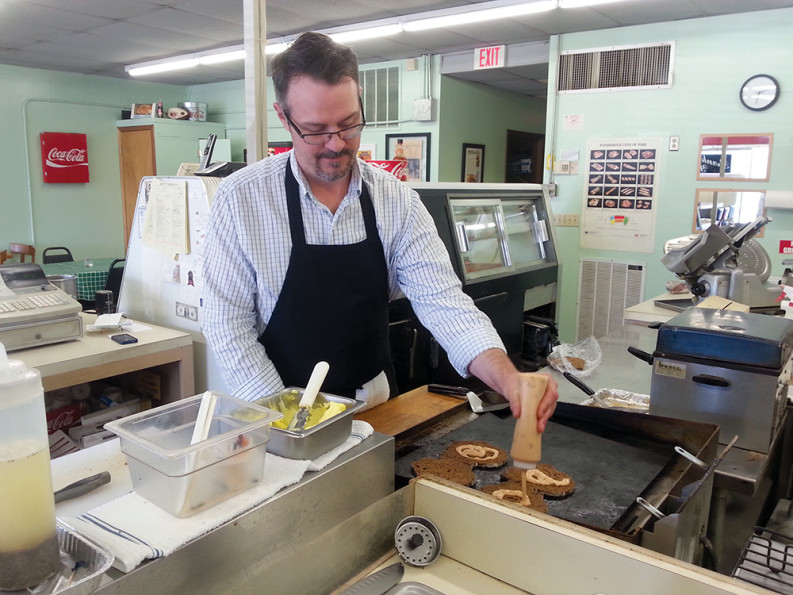 It’s a bit sad to see one of SoKno’s finest leave Moody Avenue after 19 years and cross the river to downtown, but if that’s what it takes to keep Frussie’s Deli and Sandwich Shop alive then we’ll live with it. Owner Jay Brandon is packing up shop and heading to 722 S. Gay Street.

“I’m in a strip mall where almost everything’s been closed for the three and a half years I’ve been in here—Big Lots shut down a few months ago, the bank over here on the corner went out of business, the Phillips [gas station] over there closed down. It’s just time to make a move,” Brandon says.

The relocation isn’t something he’s particularly happy about, though: “I tell people it’s either I close it up for good or I go somewhere where there’s more business and try to make it there.” He’s looked for new digs “as far as Farragut and back to town.” He picked the Gay Street location, in part, because it’s as close to South Knoxville as he can stay and still take advantage of the downtown vibe. “I think a New York-style delicatessen, like this is, just needs an urban environment like downtown to thrive.”

May 1 is the last day in the old space, so hurry up if you want lunch with a side of nostalgia.

Before Knoxville reclaimed its own flour power, Frussie’s carved a special place in the hearts of deli devotees with delicious home-baked bread; French bread, pita, Kaiser rolls, and eight other varieties all rise in-house and contribute a whole new level of tactile and tasteful pleasure to the sandwich experience. Add house-cured and roasted deli meats and you’ve got all the makings for fantastic sandwich eating—the kind that has made Frussie’s a Knoxville institution.

Brandon respects that and says he won’t try to fix what ain’t broke—that’s been his mantra since taking over the place from the late founder James Dicks in 2011. But you will see a couple new things at lunch, and he’s adding breakfast.

Brandon says you can look for two new sandwich options, including the Downtown Havana. “It’s gonna be like a Cuban on our homemade bread,” he says. “And I’m going to add a sandwich … that we’ve been eating here, but it’s one I don’t share with the public generally. It’s called the Le Big Fruss. It’s a roast beef sandwich on a Kaiser roll with the same things you’d find on a Big Mac—lettuce, pickles, Thousand Island—but it’s really good when you make it with real bread and roast beef.”

Breakfast is inspired by a spot Brandon knew in New York that offered stuffed croissants—“It was just grab and go.” He wants to recreate that experience with homemade muffins, croissants, cinnamon rolls, and other bakery goods that he’ll serve with Three Bears Coffee. On Saturdays, breakfast will slow down a little and the menu will include egg sandwiches and pancakes from Brandon’s MeeMaw: “She has this awesome recipe that I’ve been eating since I was a kid,” he promises. 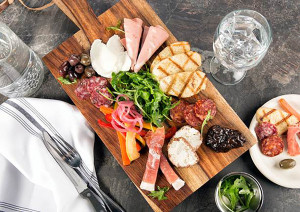 The folks at the Copper Cellar Family are resurrecting and revamping an old West Knoxville favorite, Cappuccino’s (7316 Kingston Pike, 865-673-3422, coppercellar.com). As in the past, the restaurant occupies half of the building where Copper Cellar West also lives, but the interior has been given a nice facelift with a modern sensibility that combines rustic wood accents and exposed brick with attractive contemporary lighting. The menu offers a mix of traditional Italian favorites with a few gluten-free options. Many items look appetizing, including a charcuterie plate that features duck liver pate, arancini, house-made ricotta pasta, and entrees such as Scallopine’ di Vitello Cappuccino (veal scallopine with Proscuitto, cheese, and spinach). 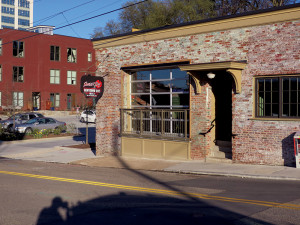 There’s a brand new aroma wafting over the 100 block of Gay Street as one of Knoxville’s favorite BBQ joints swung open its doors last week just around the corner on West Jackson Avenue. Knox Mason’s Matt Gallaher posted on his Facebook page, “My block smells amazing!” The first weekend was a doozy, but it “went about as well as it could have,” says owner Chris Ford, “And it’s really nice to be down here in a community of people I know.” Sweet P’s brings mastery of all things smoked and soulful in a bold move to become the first eatery on the reborn section of Jackson Avenue west of the viaduct. Ford does a fine job with all that smoky food, but don’t miss out on the exceptional fried pickles and some pretty amazing steamed green beans.

Gus’s World Famous Fried Chicken Approaches
Nashville’s hot chicken may be the national media darling, but it’s Memphis-based Gus’s World Famous Fried Chicken that has Knoxville foodies in gluttonous titter. Social and traditional media lit up when the franchise announced plans to set up shop in town. The recipe for the chicken is a closely guarded secret, but whatever it is includes a dose of heat that varies a little from day to day. Sometimes, according to their website, “it’ll be so spicy the tears come.” Though, “Usually, the heat is more gentle, like the touch of an old friend.” More news as it becomes available.

Food-Truck Park Assembles
On Friday, April 3, the stars will align and so will the food trucks at the first-ever food-truck park at the Historic Southern Railway Station. Blue Slip Winery (306 W. Depot Ave., blueslip.com), which makes its home at the railway station, organized the confab of seven of the 11 food trucks licensed to do business in the city. It’s like a Buzzfeed quiz that might actually matter: Which Food Truck Groupie Are You? Choose from the following: Breezy Weenie, Farm to Griddle Crepes, Forks on the Road, Gonzo Gourmet, Poutine Mobile, Savory and Sweet, and Tootsie Truck. You can munch your way to instant expertise while listening to live music, tasting a little wine, and perhaps enriching your mind, too, with a tour of the Historic Southern Railway Station and Old Smokey Railway Museum. It’s like a food court but better!

Small Bites:
• Café du Soleil, downtown’s French outpost, has a new chef, Dino Nicolou, a new menu, and they’re serving lunch again. Check them and their Croque-Madame out at cafedusoleilknoxville.com or visit in person at 416 W. Clinch Ave.

• K Brew, the excellent coffee shop at Glenwood and Broadway, is now offering a limited variety of nice nosh in addition to their excellent biscotti and brew. Bagel sandwiches are on the menu, and they’re made for the interested eater; try the Glenwood, a bagel with pear, goat cheese, and arugula.

• The Orangery’s atrium is home to the newly minted Bourbon Street Café, which features live music and a $10 whiskey sampler. The small plates include a prime Angus burger, oyster gratinée, and duck confit bruschetta.

• Sure and beggorah, we were sad to hear that the Irish Times in Turkey Creek has closed. We’ll miss the boxty, the banter, and the lovely pints—not to mention the all-day party on St. Paddy’s Day.