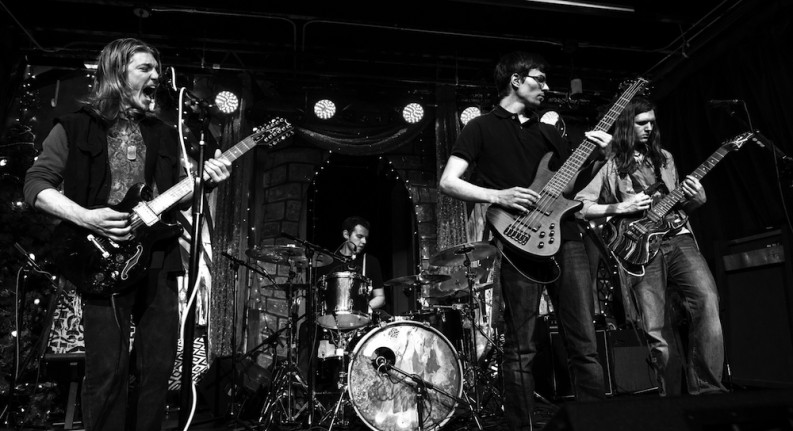 Black-metal screams, post-rock guitars, pastoral prog flutes—White Stag packs a lot of disparate ideas into a fluid, dynamic sound. But they’ve barely scratched the surface of their collective vision. The group’s Bandcamp page features six recorded tracks—a five-song EP from last April and a new single, the 12-minute behemoth “The Rhythm of Clockwork”—and their current quartet lineup has been playing local shows for roughly a year.

“We’re in a blooming time of inspiration,” says drummer Eric Sublett. And the music proves him right.

White Stag formed in 2013 after Sublett, then a recent high-school graduate, moved to Knoxville from Boston to pursue a career as a full-time musician. He connected with vocalist/guitarist/flutist Richi Worboys and guitarist Damon Ownby, both from the Sevierville area, and the trio landed a handful of shows as a three-piece, playing mainly covers, before recruiting bassist Allen Finger last year.

The King of the Forest EP showcased White Stag’s experimental, mind-altering approach to metal, weaving ambient interludes and psychedelic textures with detuned riffs, with Worboys alternating between full-throated bellow and meditative melody. But the epic “The Rhythm of Clockwork,” recorded by Paul Seguna, drummer of local prog outfit Lines Taking Shape, indicates the band’s growth in the past year, achieved partly by Sublett exposing his bandmates to bands like Between the Buried and Me, Haken, and Cynic.

“It’s definitely evolved,” says the 21-year-old drummer, a self-taught player. “It’s actually kind of crazy. The other guys grew up listening to Opeth and Tool, which might be our two biggest influences. But I’ve been listening to more progressive, dynamic music since I was a kid. At first, we sounded more like a more dynamic casual metal band, nothing too fancy. And then I turned them on to a bunch of stuff, and they fell in love with it. I’m actually really shocked at the stuff we’re writing and playing now, how quickly it came to be.”

Every real prog band has to write a concept album at some point, and White Stag is venturing into those divisive waters with their next project, an ambitious five- or six-song album that they’re hoping to record in August and fund through a pledge campaign.

“I would honestly say ‘The Rhythm of Clockwork’ is the halfway point, the in-between what we’re writing now and what we originally had,” Sublett says. “This time around, especially with a more conceptual album, we’re just trying to get all those ideas out. The change from the first EP to what we’re writing now is ridiculously drastic.”

Knoxville isn’t historically known for fostering a lot of prog bands, but the genre’s local appeal is expanding. Bands like Lines Taking Shape, Mobility Chief, and Yak Strangler are fixtures of ProgKNOXis, a recurring prog-themed showcase held most recently at the International. Still, Sublett feels like somewhat of an underdog.

“I wish prog was more prominent,” he says. “But progressive music has always been a patient man’s and a listening man’s music.”

White Stag is a young, young band, ranging in age from 19 to 22. But Sublett has never lacked for ambition. Forgoing college and a 9-to-5 job for music—especially such an unconventional style of music—is a bold life choice. And the quartet is fully committed to White Stag, wherever that unique path takes them.

“We’ve all really dedicated ourselves to this,” Sublett says. “I’m kind of taking a break from school, personally. I’m sure the other guys are the same way, but I won’t speak for them. When I first got here, it was a big change in my life. I didn’t want to spend a bunch of money on school and graduate with a degree I’m not inspired by. Ever since I picked up the drums, I’ve wanted to do that with my life, so I’m going for it. I’m ignoring society’s standards.”

WHO: The Atlas Moth with Generation of Vipers, Wampus Cat, and White Stag

WHERE: The International (940 Blackstock Ave.)