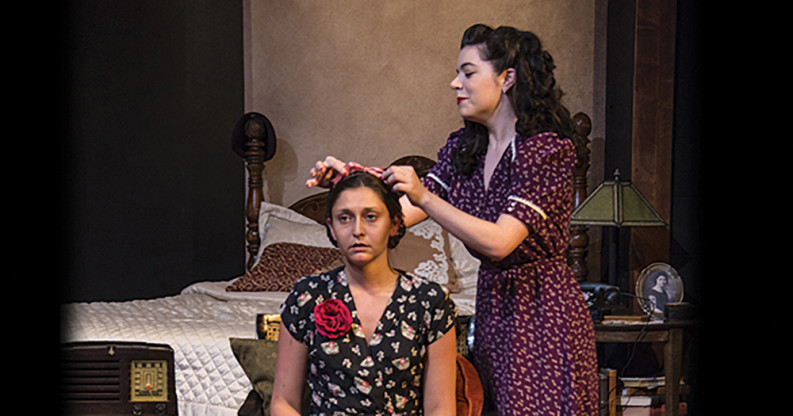 Time heals all wounds, the popular saying goes. But is that really true? The reality of living with the scars and confronting the memories in one’s past is often anything but a pleasant healing process. That is certainly the case in Barbara Lebow’s 1985 play, A Shayna Maidel, a student/faculty production currently running at the Clarence Brown Theatre’s Lab Theatre space.

Two sisters—one a survivor of a Nazi concentration camp, the other raised in New York City from age 4—are essentially strangers to each other when they are reunited in New York in 1946. Rose Weiss left Poland for America with her father, Mordechai Weiss, while her mother and older sister, Lusia, remained behind because of sickness, only to be trapped later by the ensuing Nazi occupation. Rose remembers nothing of her early years in Poland and has become a modern woman living a modern American life. In contrast, Lusia’s life has been a struggle to survive the physical deprivations, Nazi atrocities, and separation from her husband—now memories burned into her soul like the concentration-camp tattoo on her arm.

For the sake of continued existence, Lusia has chosen to submerge her memories, erecting an adjustment barrier between the sisters. Each sister, too, feels the friction with their stubborn patriarchal father in a different way—assimilated Rose has rebelled against her father’s Jewish orthodoxy, while Lusia must confront the anger she feels for the circumstances of her abandonment.

Lebow slowly, methodically, and with a certain icy objectivity peels away the layers of the family relationships, revealing, piece by piece, the details of their histories and the psychological underpinnings. Director Terry Silver-Alford and his creative team succeed wonderfully in showing us the uppermost layers—the physical contrast of Rose’s comfortable American life with Lusia’s conflicts and the sisters’ interactions with their stubborn patriarchal father. Unfortunately, the innermost layers of the emotional journey—where the deepest aspects of character revelation and resolution should surface—remained out of reach in this production. As a result, we walk away sympathetic and moved, but only superficially, and with many questions about the family left unanswered.

In a bit of remarkable casting, Rachel Finney and Sophia Shefner, as Rose and Lusia, respectively offer enticing takes on the physical and vocal essence of their characters—Rose’s charming and perky New York-ese and Lusia’s struggles with English played for some mild comic relief.

University of Tennessee Theatre faculty actor Jed Diamond takes the role of Mordechai Weiss, looking every inch the rigid, autocratic father, a man who has perfected bullying and religious acceptance to justify the tragic circumstances and his failed family responsibility. While Diamond’s physical stage presence and engaging Brooklyn Yiddish dialect sold the role, he offered little obvious evidence of Weiss’ struggle with guilt—certainly not enough for the possibility of real reconciliation that the finale suggests.

Lebow uses flashbacks to reveal Lusia’s past in Poland with the supporting characters of her mother (Sarah Compton), her friend Hanna (Gracie Belt), and the man she would marry, Duvid Pechenik (Andrew Price Carlile). While the shifts in time and place are intended to take one by surprise as extensions of the action, the startling effect is brisk and dramatic, as characters from the past appear without dialect—all quite credible in this production’s nicely compact, one-unit set.

Two emotional landmarks serve as dramatic peaks in the narrative and are indeed high points in this production. In the first act, Lusia and Mordechai compare their lists of people in the family circle who are still missing or whose fate is unknown. It is this reading of the missing and murdered, including Mordechai’s wife and other family members, that draws the characters away from their petty differences and sets the agenda for the second act.

The play works its way to the finale by way of a newly discovered letter from Rose’s mother to the daughter in America she will never see again. With the reading, Rose learns, perhaps for the first time, the compelling importance of family bonds and why one’s survival, and hope for the future, ultimately depends on them. Has time healed this family’s wounds and broken down the barriers toward their psychological survival? This production of A Shayna Maidel would like you to believe it with all your heart.