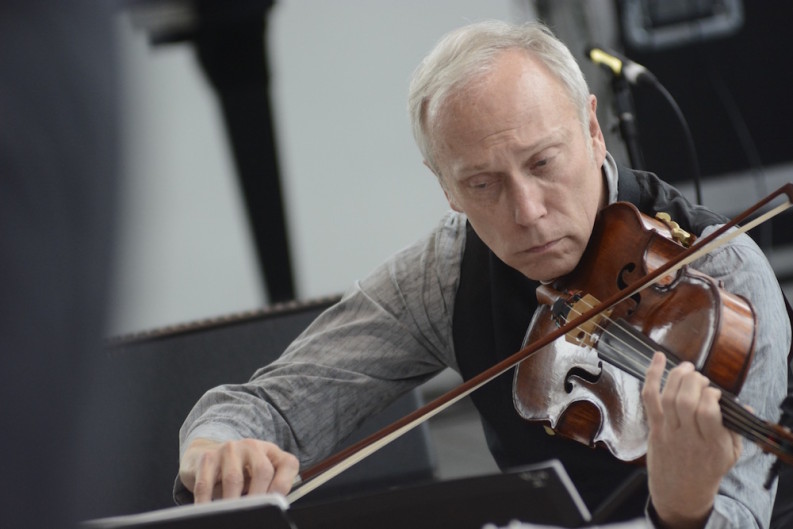 The first day of Big Ears is down. As usual, it was a mix of anticipation and exhaustion, with some surprises, both logistical and aesthetic, and too much music for one person to hear.

It’s appropriate that Ashley Capps got Kronos Quartet, the weekend’s workhorse headliners, to perform, along with Chinese pipa player Wu Man, a short piece by Kronos associate Philip Glass at the Knoxville Museum of Art as the first official event of the festival. It was a lustrous, shimmering, gorgeous performance, a small but pleasant surprise, and a fitting way to kick off the kickoff party at KMA.

Icelandic cellist Hildur Guðnadóttir followed with a brief set at KMA. She’s one of the artists I was most looking forward to—I’m partial to strings anyway and find the deep, rich tones of the cello in particular seductive. It took a few minutes for Guðnadóttir, who sings and loops her playing through a laptop, to build momentum, but once she did, playing thrumming low end melodies to looped accompaniment, it was entrancing. (I noticed a boy in front of me, about 10 or 11 years old, who refused to leave when his mother wanted to go.) Guðnadóttir is playing again at the Square Room tonight. I recommend it highly if you have any interest at all.

I joined about 30 other people in the KMA’s auditorium for a screening of Bill Morrison‘s renowned art film Decasia, introduced by Morrison himself. Made up of images of decaying film stock—commercial features, travel documentaries, instructional films—it’s a dizzying spectacle. I’m especially curious about how it was made—did Morrison film the film (and were we watching a video projection of that)? Almost endlessly bewildering and beautiful, and perfectly accompanied by a full-throated orchestral score by Michael Gordon. (I did find, however, that while the film’s formal qualities remained beguiling throughout, the central metaphor of decay, erasure, and finitude wore thin after about 45 minutes.)

Kronos Quartet and Wu Man’s set at the Tennessee Theatre a little later started with Terry Riley’s The Cusp of Magic, a piece commissioned by Kronos and recorded in 2008. I found it sweet but off-kilter, even a little fussy, so I left for dinner after two movements. And then, of course, they were all joined on stage by Riley himself (who sang!) and Laurie Anderson, so I missed out on what’s probably the most talked-about performance so far.

I closed the night out with Steve Gunn at the Square Room—nice laid-back West Coast guitar, phenomenal technique, echoes of all kinds of great guitar music, from the Grateful Dead and Neil Young to Merle Travis—and Demdike Stare‘s live electronic accompaniment to Häxan: Witchcraft Through the Ages at the Bijou Theatre. That was another surprise—a full house, 700 people, listening to a spooky, dubby soundtrack to a 1922 silent movie about the occult. It’s a great movie, funny and strange, and Demdike Stare provided an apt score—I sensed that some of the duo’s most darkly dramatic moments were just as self-aware and witty as the movie.