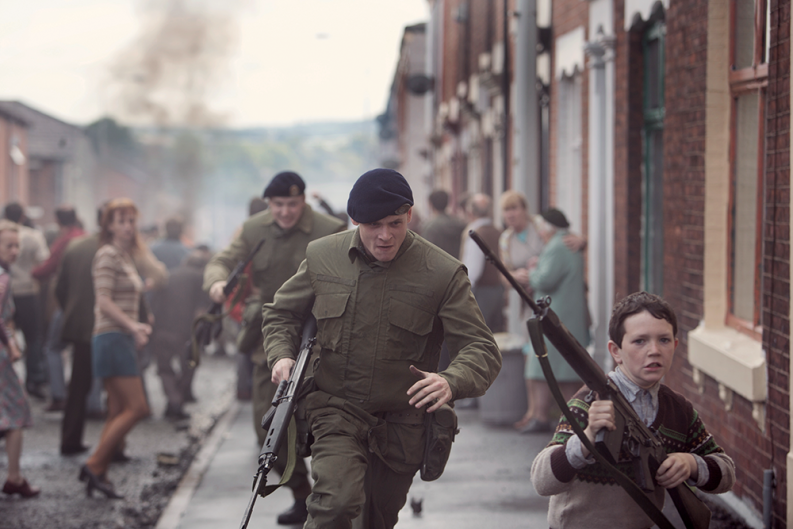 In the years following the violent, decades-long Northern Ireland conflict known euphemistically as the Troubles, Belfast has emerged as a uniquely troubled chunk of cinematic real estate. It’s provided the backdrop for a long list of films about the bloody civil war between British loyalists and Irish nationalists; more recently, the city was terrorized by a fictional serial killer in the frightening (if uneven) BBC series The Fall.

It’s back to the Troubles for ’71, an extraordinarily tense British thriller from first-time feature director Yann Demange. It’s being billed as an action film, and that’s technically correct—there are explosions, shootouts, fistfights, stabbings, and breathless, nerve-rattling chase scenes. But ’71’s intensely sympathetic protagonist is anything but an action hero; Pvt. Gary Hook (Jack O’Connell, most recently seen in Unbroken) is just a bewildered young man, plunged into a nightmare, whose only goal is to get out alive.

Gary’s face is battered and bloodied the first time we see it. The film opens with the young soldier taking jabs to the head during a combat-training session; he’s a new recruit, being put through the paces of basic training. Soon he and his comrades are crawling through muddy ditches and hauling themselves over fences as they prepare for their first deployment.

The training foreshadows the trials Gary will soon endure, but in no way does it prepare him for what will be the worst night of his already troubled life. They were expecting a stint in Germany, but instead Gary’s unit is sent to Belfast to provide support for anti-IRA operations. A well-meaning but inexperienced young officer (Sam Reid) sends the new recruits into a volatile situation that quickly turns violent, and Gary is accidentally abandoned in hostile territory. ’71essentially becomes a chase film as the terrified young soldier tries to make his way back to his barracks.

The cat-and-mouse sequences that play out over the course of the night are masterfully staged and relentlessly suspenseful, but what’s really captivating about ’71 is the way it rejects nearly everything we’ve come to expect from action movies. Demange, working from a script by Scottish playwright Gregory Burke, isn’t interested in the obvious beats that have come to define the genre; I can’t think of another action movie that sees its hero hide in a dingy bathroom and sob as his enemies search for him, but that’s exactly what Gary does. He isn’t a coward, but neither does he have anything to prove. He doesn’t want to kill and he doesn’t want to die—he just wants to go home.

Far murkier are the political machinations that work against Gary at nearly every turn. The plot is twisty and not always easy to follow. It gets flat-out confusing at times, but that seems to be more of a creative choice than a narrative failing. A number of people are prowling the streets of Belfast in search of the frightened young man: there are British military personnel hoping to save him, and IRA gunmen out to kill him. Things get complicated when the lines between the warring factions begin to blur, and each side splinters from within. Nothing is black and white here, and Gary begins to suspect (rightly) that he can’t trust anyone. There are good guys and bad guys on both sides of the conflict, and Gary finds himself caught up in shifting alliances and power plays as he makes his way across a nearly apocalyptic cityscape.

When violence does erupt, it’s visceral and ugly. There are a couple of moments in ’71 that are tough to watch—the camera occasionally lingers on the tragic after-effects of violence, and there’s a squirm-inducing bit of impromptu surgery that isn’t easily forgotten—but the bloodshed is never gratuitous.

The result is a claustrophobic, paranoid, and expertly paced thriller that never relies on flashy effects or overly stylized fight scenes. It’s just a likable guy running, hiding, and fighting for his life, and there’s something incredibly satisfying about that.