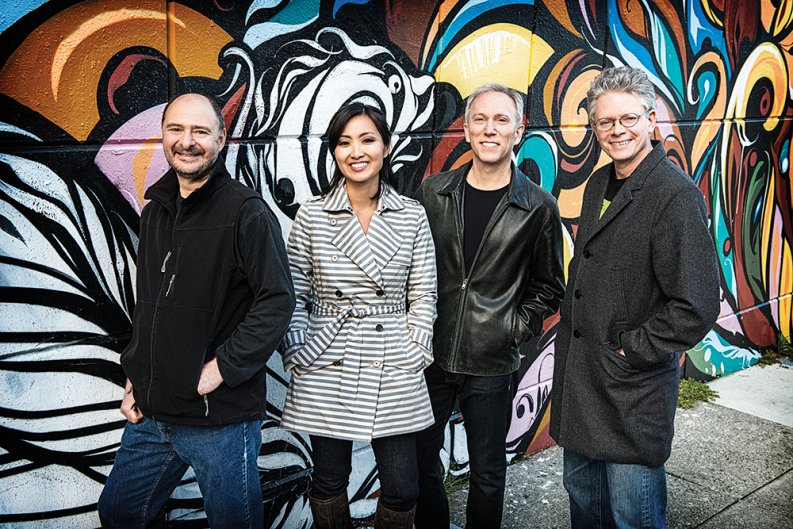 Calling all Big Ears. Knox County Public Library’s Sights and Sounds collection presents a tasting menu of sumptuous sounds representative of this week’s visiting artists. Come and get it.

Kronos Quartet
Striding into the ensemble’s fourth decade, Kronos Quartet has consistently expanded upon what might be expected from a string quartet. In the hands of these players (currently violinists David Harrington and John Sherba, violist Hank Dutt, and cellist Sunny Yang), that lush and layered instrumental voice appears to be without limits. Although they do not contain music related to this weekend’s program, especially recommended are Pieces of Africa and Early Music. Both are breathtakingly beautiful and full of surprises. Early Music does contain some ancient music; the earliest piece is attributed to the Byzantine abbess Kassia. But it’s presented alongside 20th-century compositions by Moondog, Harry Partch, John Cage, and Arvo Pärt, each performed with the same sort of reverence and sublimation of the self. Notions of antiquity and modernity and fixed relationships to a period-specific audience evaporate quickly.

Jozef van Wissem and Jim Jarmusch
The 2012 album The Mystery of Heaven is a fascinating suite of atmospheric duets. Van Wissem plays lute and 12-string guitars opposite Jarmusch and a rack of distorted guitars and effects. One hears some pretty compelling tugs of war—then vs. now, exact vs. vague, loud vs. not. The lute is so pretty and light and evocative, Jarmusch’s pedals and open tunings are so something else. He generates sustained chords with no real beginning or end, and only minute changes in pitch. Van Wissem’s lute, conversely, is nothing but details. The combination is surprisingly complex and gratifying. “The More She Burns the More Beautifully She Glows” features an excellent Tilda Swinton cameo of spoken lyrics.

Amen Dunes
According to the lore, the earliest songs written and recorded by Damon McMahon, later to be attributed to Amen Dunes (initially a pseudonym, the name has remained after Jordi Wheeler and Parker Kindred turned Amen Dunes into a trio) were never meant to be heard by the public. The overall sound of Love and Through a Donkey Jaw is consistent with that—the generous wash of filters and reverb remind listeners of conversations or casual singing or shagging overheard through shared apartment walls. Without seeming derivative, these songs descend from the tradition of musical diary-keeping. Popular for mostly good reasons.

Bill Frisell
Nobody has bigger ears than Bill Frisell. His presence, smile (behind spectacles, no less), and vast musical intellect are invaluable for many reasons. Because of rock ’n’ roll, we have seen that many people enter the larger world of music via the guitar. If it’s Bill Frisell’s guitar that transports them, the possible destinations are about infinite. Better than an omnivore, Frisell only offers you things worth hearing and knowing and holding close for a good long time. If this column is helping you build a list, put All We Are Saying and Unspeakable near the top. The former is a playful and open-minded approach to the John Lennon songbook. The latter, circa 2004, sounds like the record Frisell might have been rehearsing for with the handful of Americana and country-and-western workouts that preceded it. Unspeakable is about perfect, both as a guitar record and as a guide to highly effective sampling. Listen to it this spring, and from now on when you walk down the street on any sunny day, pretending to be someone else or not, you will hear the world sing to you a song called “Alias.”

A Winged Victory for the Sullen
Let us not say less is more. Thank you, please. It makes no sense. Let us say—with regard to the much-augmented duo of Adam Wiltzie and Dustin O’Halloran—that less is plenty, or at least certainly enough. This is a wonderful record of mostly piano and chamber-music accompaniment. It requires and rewards some patience.

Bryce Dessner
Matt Berninger, vocalist of the chamber-rock outfit the National, was carried to Ohio by a swarm of bees. Or so he sometimes croons, while composer, producer, and multi-instrumentalist Bryce Dessner chimes beams of guitar all around him. That striking image of wind-borne levitation suits Dessner’s approach to music. He seems to get where he’s going less by direct path than by murmuration. And he seems to be many places at once. Dessner has been collaborating with Kronos Quartet since 2009, and Aheym, released in 2013, documents the success of those pooled resources. The record is a treat, containing four compact and diverse compositions, of which “Tour Eiffel” may be the most charming. Dessner is also present in the stacks as co-leader of the fringe-classical improv ensemble Clogs. Lantern was released in 2006, fairly central to the group’s timeline. But it makes for a great introduction to their surprising and surprisingly fetching music.

Bill Morrison
Decasia begins and ends with what may be its most lovely footage. It’s a dervish dancer (according to external sources) filmed in Cairo circa 1928—a man who, in order to offer access to God, sacrifices that which protects most of us from God: balance. Most folks who watch the film closely will remain off balance for the next hour. It’s a beautiful mess: lovingly edited archival footage that makes artistic use of the patterns formed by oxygen and other detractors as they expedite the decomposition of film. It’s pretty. It’s seldom seen. And it may be the best any of us can hope for in terms of eulogy or lasting remembrance.

Jim Jarmusch
Sometimes because of and sometimes in spite of his patented quirks, most who encounter the films directed by Jim Jarmusch develop a soft spot for his work. They are what they are and it must eventually be acknowledged that we are who we are because we have seen them, and because maybe we have seen ourselves in them. The title “curator” is not a universal honor. But Jarmusch is uniquely qualified to commend and recommend the films of others, as he’ll be doing this weekend, among other things. The library’s collection owns two exquisite titles that demonstrate Jarmusch’s impact on cinema, and cinema’s appreciation of his gifts. At least in Finland. Aki Kaurismaki’s 1989 Leningrad Cowboys Go America is a straight-up homage to Jarmusch’s 1984 Stranger Than Paradise. In case the edits, pace, and other references are too subtle, Jarmusch also appears onscreen as a deadpan used-car hustler. Mika Kaurismaki (Aki’s older brother) used Jarmusch to excellent effect as Greek chorus and on-cam narrator in Tigrero, a doc that follows ball-of-fire Samuel Fuller back to an inland Brazilian village where Fuller and a crew shot scouting footage in 1954 for a John Wayne movie never realized. Jarmusch and Fuller screen the archival footage of the posing and socializing villagers for their descendants. The 1990s filmed response reminds you, sigh, along with Morrison’s work, that the enduring subject of almost all film is mortality.