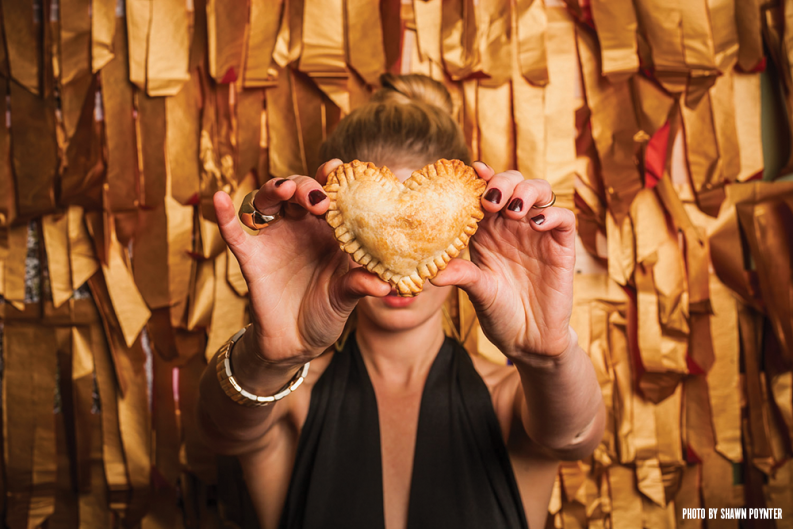 Dale’s Fried Pies
865-236-1590, dalesfriedpies.com
Dale Mackey has taken fried pies from their church social and fall festival goodness to a whole new caste of tasteful indulgence. Her wonderworks are both sweet and savory—including an indulgent mac-n-cheese pie and the often sold-out chicken and waffles option. If you want to try that one, you’ll have to be near the front of the line. For now, you’ll have to keep tabs on Dale via Facebook and Twitter if you want to capture some pie—but it’s worth it.
Hours and location: Varies, but she’s usually at the Market Square Farmers’ Market (starts May 2).

Holly’s 135
135 South Gay St., 865-329-0000
The Holly Pocket is a Pop-Tart-looking delight that’s filled with a variety of the sweet and savory—including things vegetarian or not (which is “Meatatarian” in Holly argot). While the fillings vary for this frame of pie-crust dough, they all share the essence of Holly’s cooking: big, satisfying flavors in fresh approaches to both classic and off-the-top-of-her-head combinations. Look for stuffings like apple and white cheddar with mango chutney or curried pork with sweet chili sauce. They’re available on the brunch menu, so you can bring your electronic device and reinvent your Saturday morning childhood right there on the spot.
Hours: Mon.-Sun.: 11 a.m.–10 p.m.; Brunch: Sat.-Sun.: 11 a.m.–3 p.m.

Gramma’s Pasties
465 Park 40 North Blvd., 865-765-4726, grammaspasties.com
This local option offers a taste of Cornwall’s contribution to world cuisine. The hand-held pie is stuffed exclusively with savory and hearty fillings. Gramma has several steak-and-potato options that combine sirloin and spuds with onions, mushrooms, or Stilton cheese. There are also vegetarian choices like eggplant with pesto or broccoli with cheese and potatoes. You can eat in or win friends and influence your kids by taking a stock of frozen pasties home.
Hours: Mon.–Fri.: 11 a.m–6 p.m.