Cold Fish: In Search of the Prized Walleye, at Cove Creek - The Knoxville Mercury 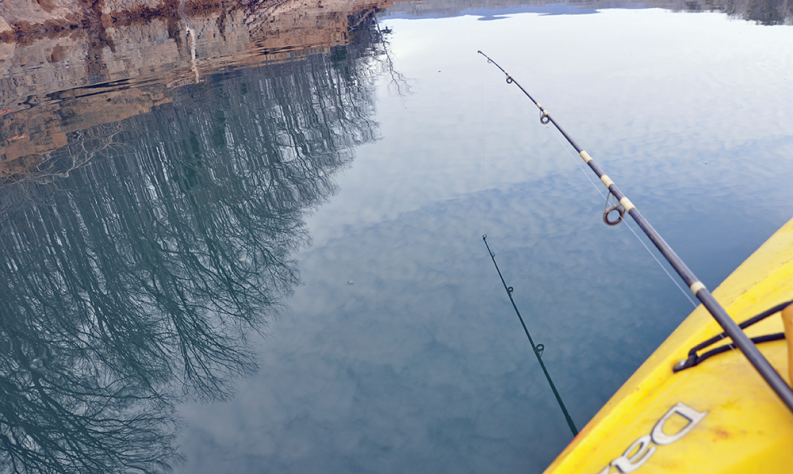 I was paddling as fast as I could to get to my takeout, a half mile away. My hands, in fleece gloves, were swelling and stiffening to the point of intolerance. What had driven me to this state of desperation and near madness on this January morning?

Why walleye? Well, I’ve never caught one, and the Tennessee Wildlife Resources Agency (TWRA) website says they are “prized for their taste.” Though it is the state fish of Minnesota and North Dakota, a fish that favors cold waters, it has been stocked at Norris, Cherokee, Tellico, Ft. Loudoun, and other East Tennessee reservoirs. It is toothy and golden, a battler that Midwesterners mount on pedestals in larger-than-life effigies, much like the leaping catfish sculptures you see outside Southern restaurants.

My friend Drew Crain, a biologist at Maryville College, said he caught one on Chilhowee Lake using a nightcrawler. At first I thought I’d go up there and try for that same fish that he had released, but then I got a tip from a TWRA biologist Jim Habera, who had “just done an assessment” of walleye on Cove Creek embayment, one of the arms of Norris Lake. Habera said fishing off rocky points with a jig and minnow or with just a minnow on the bottom might produce results.

I had fished from my kayak and I had fished in cold weather, but this quest for the walleye taught me several hard lessons (the need for neoprene gloves, for example), and looking back, those who declined my invitations to go along seem like the sensible, wise friends I knew them to be. 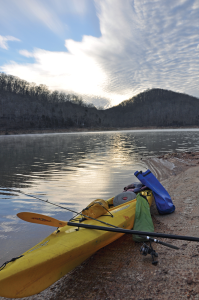 The first time I put in near the mouth of Cove Creek, about a half mile upstream of Norris Dam, the temperature was in the 40s, but the wind roared, gusting to 20-25 mph. I paddled up the creek and away from the dam to escape the wind, which mocked my attempts at “still fishing.”

Catching any fish, much less a walleye, would have surprised me. I was decidedly low-tech, in a “sit-inside” kayak, without the rod holders and compartments you see in the sit-on-tops popular on the World Fishing Network’s The Kayak Fishing Show, these TV boats outfitted with sonar and fish finders and multi-compartmental tackle boxes, roomy enough for a cooler and a picnic basket. I had my camera in a dry bag lashed on the deck in front of me, one spinning reel and rod, and a dozen minnows, stowed in the space between my legs in an open ziplock bag half full of water. That day, my company on the lake was one fishing boat, two guys trolling back and forth in the middle of the channel.

On my next trip the wind was calm but the temperature was in the low 20s. At the concrete ramp, where somebody had just put in a boat, the water that had dripped from the trailer had left a sheet of ice. Those fishermen were trolling back and forth about 30 feet away.

“How are y’all doing?” I asked after I went through my awkward launching routine, managing to keep my feet dry because of the neoprene diving boots I wore.

“Cold,” said the one standing in the front of the boat.

“You ever hear of anyone catching walleye here?”

“Yeah, in [late March] they’ll be spawning near Twin Cove Marina,” he said, pointing up the creek.

“What are y’all fishing for?”

I knew I was pushing the limits of inquisitiveness, so I paddled on downstream toward a rocky point and wished them luck. I thought it a bit lame of them to be fishing for the commonplace bass. Rockfish I didn’t know much about, other than they could get really big.

I spooled out 30 or 40 feet of line and let the lead weight rest off the bottom, the minnow a foot above it fluttering around in an enticing way, I imagined. This is called a dropshot rig.

I figured it would be a longshot to catch a fish, so I got my camera out of the dry bag and started fiddling with it. The lucid lake surface reflected the waffled cloud patterns and the bare winter branches of the forest on the hillsides that fronted the lake.

While I took pictures of my line as it entered the water, I heard the rod sliding across the plastic cockpit. I grabbed the reel to free myself from what I thought was a snag and discovered I had a fish on there. I didn’t even set the hook, just started reeling him in, assuming it was a walleye because that’s what I wanted to catch and that’s where the TWRA guy said they would bite.

I got him up to the boat, and I guess he’d already swallowed the poor minnow. He seemed a little lethargic compared to the walleye I’d seen on the World Fishing Network. He’d fought the whole way but nothing spectacular, no jumps. He was a keeper, about 7 inches long, I’d estimate, around 3 pounds. I looked inside his mouth for the teeth. He had none! This was good, I thought, that I’d caught a toothless walleye, an old guy, because I’d forgotten my pliers in the car.

I don’t know if anybody else has tried to take a picture of a fish from the cockpit of a kayak, but it is an intricate operation, and in order not to lose the camera and the fish, I put the fish on the stringer, and held him at arm’s length for a one-handed photo. I was thinking that I’d found the walleye hotspot, that I’d catch about four more and then filet them for dinner. Then, looking through the viewfinder I realized something: I’d caught a smallmouth bass, not a walleye.

Pretty soon after, I released him. He darted down into the depths again. I got onshore to stretch my legs, and my cell phone flickered to life, the reception fading in and out as I tried and failed to return the call. I set free my minnows. For some reason, out of the boat, I was getting colder and colder. There was no wind and I was not wet. That’s when the painful paddling back to the ramp began. It was enough, that day, to pull the smallmouth from the depths and then to return him. The walleye could wait for spring.