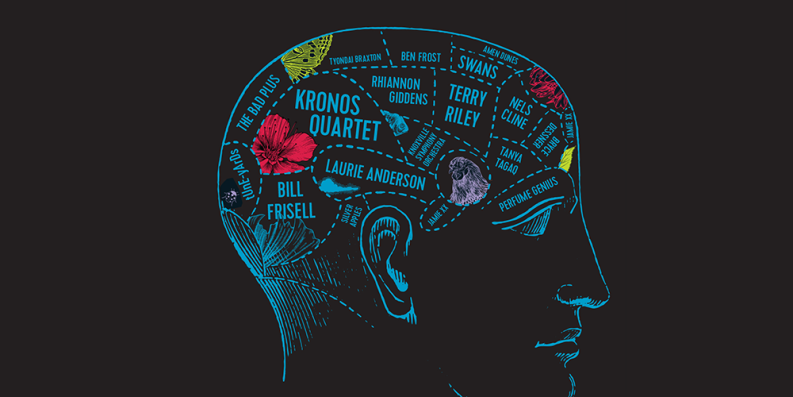 What is Big Ears? The quick and easy description might be “avant-garde music festival,” but that barely encompasses the range of artistic interactions that arise when you gather so many inventive people in one setting. In fact, let’s avoid labeling it altogether and just hear what the artists themselves have to say about the things they do in our collection of Big Ears 2015 preview coverage. Click on the links for the full previews, written by Chris Barrett, Eric Dawson, Carey Hodges, Nick Huinker, Ryan Reed, Alan Sherrod, and Joe Tarr.

Visit the official Big Ears website for a schedule,  the full lineup, and more.

Sam Amidon: “Amidon’s self-dubbed “re-imagined folk songs” are also collaborations in themselves. They’re often stitched together from slices of traditional folk songs and modern offerings (check out his version of R. Kelly’s ‘Relief’) and rearranged to resemble something new entirely.”

The Bad Plus: “Over the past 15 years, the Bad Plus has expanded the palate of contemporary jazz, layering hues of avant-garde rock and classical and pop into their expansive instrumental canvas.”

Ben Frost: “Though Ben Frost’s previous albums were characterized by a moody, dark, ambient vibe with intermittent flashes of brutality, A U R O R A is a volatile affair throughout, an album composed almost wholly of harsh electronics and torrential drumming.”

Grouper: “Grouper’s intimate compositions slowly seep into the senses, drowning out distractions as they explore themes of space and nature.”

Steve Gunn: “In his music, you can hear traces of the Grateful Dead, Gene Clark, Michael Chapman, and the forgotten or hardly known songwriters of the 1970s that Gunn references in his interviews and curated playlists for online magazines.”

Hello City: “The challenging sounds of Big Ears are an easy fit with the city’s musical identity—and a weekend when downtown is flush with adventurous listeners is the perfect time to show off the local scene.”

Holly Herndon: “Though Johnson City is more known for its old-time and country-music legacy, it also produced Holly Herndon, one of the most exciting, innovative electronic musicians working today, who fashions challenging but beguiling sounds using her voice and laptop.”

Kronos Quartet: “Kronos Quartet has recorded and performed music from across the spectrum—from Esquivel to Jimi Hendrix, Steve Reich to Terry Riley, Alban Berg to Alfred Schnittke, Bryce Dessner to Oswaldo Golijov, and most of what lies between. Kronos Quartet has redefined a form that many consider to have been perfected by Beethoven. And Kronos has refined that form in ways that, surprisingly, can make the string quartet seem the ideal descriptive and documentary device for life during the late 20th and early 21st centuries.”

More Kronos Quartet: “The journey through the music of Kronos always leads back to where it began for me—with Philip Glass.”

Max Richter: “Big Ears audiences get two chances to take in Richter and his genre-bending mix of electronics and traditional instruments—music that started with solo recordings and that now includes cinema scores, ballet, and opera.”

SQÜRL: “Jim Jarmusch’s SQÜRL works in a sort of doomy, feedback-laden sludge mode not unlike Boris, Earth, or Sunn O))).”

Swans: “For Michael Gira, the aim is not pain or endurance but beauty and transcendence, however fleeting.”

tUnE-yArDs: “Unlike a lot of bands playing Big Ears, Garbus’ music leans toward the more accessible side of the spectrum. But even if you label it “pop music,” it’s a pop that is complex and experimental.”

William Tyler: “Nashville guitarist William Tyler, the son of a country-music songwriter, is most conversant in folk, rock, and country, but the diversity of acts he’s backed demonstrates his flexibility and range.”