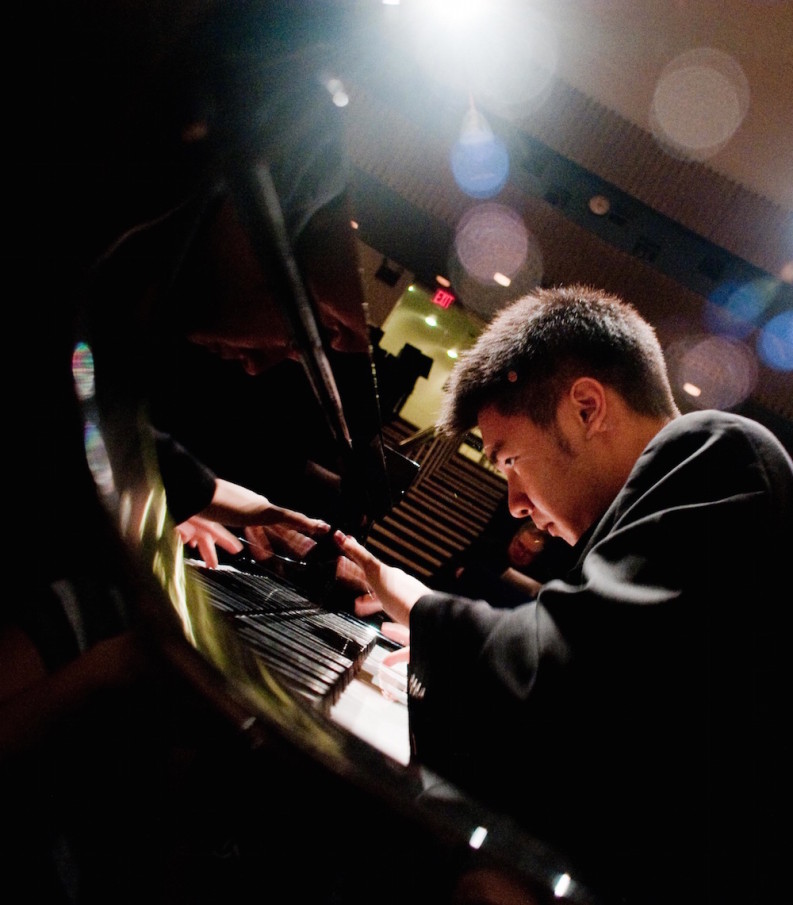 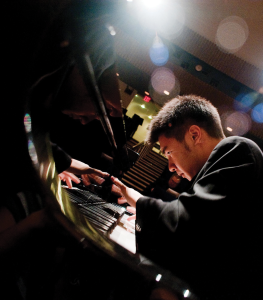 It is difficult to pick a single emotion when confronted with a pianist like Conrad Tao. “Amazement” could be one—the 20-year-old pianist, who appeared with the Knoxville Symphony Orchestra last weekend in Mozart’s Piano Concerto No. 25 in C Major, has leaped from being a child prodigy into the rarefied world of adult performers possessing an extraordinary degree of musical maturity and inventiveness.

“Awe” is not out of the question, either, particularly after his stunningly explosive, almost frightening, mad tear through the third movement of Prokofiev’s Piano Sonata No. 7 as an encore on Friday. On the other hand, “total admiration” applies, too, as it does to any concert soloist who can confidently own the occasion with a pair of skinny jeans and a muted red shirt. However, I’m going with a more down to earth “exuberant enchantment,” for Tao’s seemingly innate storytelling ability, which invested each Mozartian phrase with a refreshing twist and a perfect reason for existing.

Perhaps because of Tao’s parallel educational track as a contemporary composer, he appeared dedicated—unconsciously, at least—to turning the piano into its own orchestra of sorts. In the slow Andante movement, he seemed to absorb and reflect the flavor of the woodwinds that provide much of the descriptive atmosphere. By the movement’s close and into the finale, Tao’s piano echoed the stream of lyricism of the violins. Tao did not shy away from percussion, either, whether it was from notated punctuation or from a delightfully uninhibited pedal foot.

The guest conductor for the evening, 31-year-old James Feddeck, proved to be a wise leader with style, substance, and control beyond his years. In addition to recent notable guest-conductor gigs, Feddeck’s resumé already includes assistant conductor positions with the Cleveland Orchestra and the Memphis Symphony Orchestra. Together, conductor, soloist, and orchestra turned in a performance in the Mozart concerto that was exceedingly fresh, bright, articulate, and attention-grabbing. This is indeed an accomplishment in a work that features a complex and ingenious textural sophistication instead of the achingly poignant and memorable melodies found in some of the composer’s earlier concertos.

We shouldn’t overlook the age-related connections of the evening’s program itself. Feddeck opened the concert with Rossini’s last overture, the familiar Overture to William Tell, written at age 37, before his 40-year retirement from opera. At the same time William Tell was getting its premiere in August 1829, 20-year-old Felix Mendelssohn was touring Scotland, acquiring inspiration for his “Scottish” Symphony, the concluding work on the program. However, it took Mendelssohn almost 13 more years before his “Scottish” would see the light of day.

Chronologically, the “Scottish” Symphony was the last of five Mendelssohn composed, although it bears the title of Symphony No. 3 in A Minor. By the time of its premiere, in 1842, Wagner and Verdi were at the beginning of their operatic careers, Donizetti was at the end of his, and Romanticism was lurching past Beethoven into the mid-century period of Schumann and Berlioz. In this climate, Mendelssohn emerges as an evoker of images, but one more classical than modern.

What marked Feddeck’s intensely satisfying interpretation of the “Scottish” was his ability to understand Mendelssohn’s evocation of images, and to treat them with energy and precision but without even the slightest hint of sentimentality. Repeating phrases were separated by distinctly descriptive dynamics rather than by the artificial lushness of swelling crescendos and decrescendos that would later mark end-of-the-century impressionists. Even the suggestion of a storm in the opening movement shunned the overly dramatic, leaving the audience to feel the wind in their own mind. Textural separation between strings and woodwinds felt more like layers being peeled away than specific entrances and exits.

Of course, the Overture to William Tell that opened the concert contains a memorable storm sequence as well, not to mention a gorgeous cello and bass ensemble opening, and an achingly beautiful pastoral dawn featuring the English horn. Sadly, because this rightfully terrific piece of music has been used, abused, degraded, and parodied in everything from commercials to cartoons to TV, one could almost feel the impatience of last weekend’s audience for that ubiquitous “Lone Ranger” finale. Others, this writer included, savored Feddeck’s deliberate attention to the proper pace and details of Rossini’s Alpine references—even without a fiery horse or a single cloud of dust in sight.