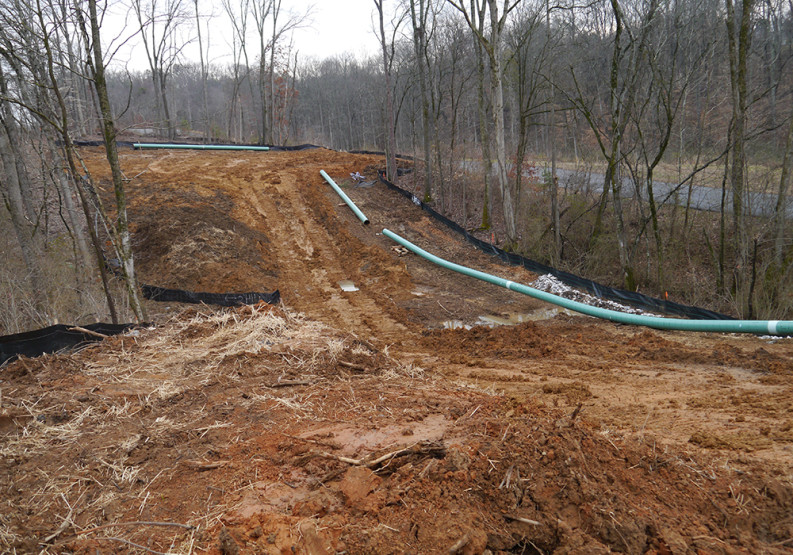 The University of Tennessee’s decision to switch its Knoxville power plant from coal to natural gas will roll back East Tennessee’s contribution to global climate change by slashing carbon-dioxide emissions.

But installing 10 miles of gas pipeline through blue-collar neighborhoods and two county parks is no small undertaking. It involves clear-cutting thousands of trees—nature’s original carbon-dioxide scrubbers.

The irony is not lost on Donna Webster, who lives on Legion Drive and is grieving as she watches huge, old trees topple on her road. A chainsaw buzzes in the background as KUB contractors dismantle the remains of a 150-foot poplar tree across the street while she discusses the project.

“This is a very working-class neighborhood. The only thing it had was big, beautiful, mature trees,” says Webster, a professional gardener.

Webster’s trees were spared, but her neighbor Lawrence Pascal lost about a dozen. “They say the carbon-dioxide emissions [from the steam plant] are twice as dirty as natural gas,” Pascal says. “If you want less carbon dioxide, then you want as many trees around as you can possibly have.”

Trees are also tumbling in Optimist Park and I.C. King Park, which is scheduled to remain closed for the work until the end of May. Last week a large stack of logs sat next to one of the park’s entrances.

The project will tear up parts of popular bike trails through the park’s woods, says Doug Bataille, senior director of Knox County Parks and Recreation. However, KUB and its contractors have agreed to restore or improve what is damaged, he adds. They also shifted the pipeline route at the county’s request so it hugs the railroad tracks instead of going through the middle of the park.

The Appalachian Mountain Bike Club, which maintains the trails at the park, has been involved in the planning. “We’ve had meetings with the contractor, letting them know we are concerned about limits on the construction,” says club president Matthew Kellogg. “I think they’re aware this is a sensitive issue. These are the people’s trees, not trees they’ve bought from homeowners.”

The pipeline also goes through Optimist Park. But there it skirts the edge, removing a swath of woods near the walking trail. This allowed the ball fields to remain untouched and the park to stay open, says Brooke Sinclair, KUB manager of gas engineering.

But homeowners in the path of the pipeline nevertheless question whether this was the best route, or just the easiest one to acquire.

A Jagged Line to Cleaner Power
UT’s current plant is 50 years old and makes about 32,000 to 35,000 megawatt-hours of electricity a year, about a third of it from burning around 16,000 tons of coal. The rest of its electricity is generated using natural gas purchased from KUB.

UT decided to abandon coal mostly because of new federal environmental regulations that go into effect in November, says Dave Irvin, associate vice chancellor for facilities services. Students and others on campus have questioned why the university didn’t drop fossil fuels completely and switch to solar, wind, or biomass. Irvin says the university considered those but found them too expensive. However, the new plant equipment could be used with cleaner fuels if prices drop, he says.

UT is paying for the $9 million pipeline using state tobacco settlement money, Irvin says. KUB will pay an additional $21 million to cover the rest of the project, which includes enhancing its natural-gas distribution system downtown to boost capacity and reliability, Sinclair says. The entire project will be completed by fall.

However, Irvin says, “The University of Tennessee will be off coal by the end of this month.”

KUB chose the route of the pipeline based on “constructibility” and how agreeable landowners were to selling easements, Sinclair says. However, eminent domain was also used.

Pascal questions the path of the pipeline, which will zigzag through various neighborhoods and beneath creeks and the lake/Tennessee River in I.C. King Park before reaching a KUB station at Topside Road. Portions hug a railroad track.

“We’re certainly not anywhere near a direct route,” Pascal says, speculating that the owners of pricey lakefront homes on the opposite side of Alcoa Highway would have raised a bigger stink if it had gone through their yards.

Webster says she has seen trees treated carefully during big utility projects in wealthier parts of Knoxville like Sequoyah Hills and along Lyons View Road. But in her neighborhood of modest homes built in the 1940s and ’50s, she says, “It’s like trees are just matches … like they have no worth.”

And unlike most utility projects, this one will provide no practical infrastructure benefits to the neighborhoods it crosses, Webster says. Instead, property values will likely drop.

Sinclair says the most direct route would have been along Alcoa Highway, but lane closures would probably have been necessary on an already dangerous road. In addition, the highway is slated for a makeover in the next few years, which would interfere with the pipeline.

Although federal and state law did not require UT or KUB to conduct a formal environmental assessment of the project, it is nevertheless heavily supervised. KUB had to provide its plans to state and local regulators to get land-disturbance permits. For example, KUB and its contractor are required to install silt fences to catch the mud and make other efforts to prevent erosion of the steep slope to the lake at I.C. King park.

Bataille says he hasn’t checked the site lately, but he feels confident KUB is handling it properly. Sinclair says KUB requires its contractor to inspect all areas where the project has disturbed dirt; the utility also pays for third-party inspections twice a week and conducts its own inspections.

Nevertheless, TDEC gave KUB a notice of violation last month for moving 300 to 400 feet of a Spring Creek tributary into a pipe to avoid a construction area. A TDEC letter dated Feb. 26 indicates the agency plans to issue an order, which can come with fines.

“The original stream and channel have been filled in and are permanently damaged beyond repair,” states the TDEC violation notice.

Sinclair downplays the problem, calling it “really more of a permitting than a water-quality issue.” She says KUB has a corrective action plan including some stream restoration. “That is not uncommon for this kind of project,” she adds.

An Unclear Clearcut
Sinclair says she doesn’t know how many trees are being cut for the pipeline project because that subcontract is handled by the contractor Southeast Connections. A project manager with the Georgia-based company did not return a Mercury phone call last week.

The steam plant conversion will reduce carbon dioxide emissions by almost 30,000 tons a year, Irvin says. A 10-year-old tree sequesters up to 48 pounds of carbon dioxide a year. That means it would take about 1.4 million mature trees to remove as much carbon dioxide from the air as the pipeline project will. (Younger trees also remove carbon dioxide, just less.) It’s hard to weigh the two against each other without knowing just how many trees are being cut and how old they are.

The path being clear-cut for the pipeline averages about 75 feet wide, Sinclair says, although it varies according to topography and road access. The permanent right of way is 50 feet, but to bury the line contractors need more space for their trucks, borers, and trenchers. Trees cannot be replanted on the permanent right of way because “we need a clear corridor for our trucks to perform safety surveys,” Sinclair says.

Pascal says KUB negotiated with him to shrink the proposed clear-cut on his property from 80 feet wide to 42 feet. This saved half his trees, although he still lost several he estimated were more than a century old. Pascal says KUB reduced his settlement as a result of the deal. He feels lingering resentment toward UT, his alma mater, over the whole project.

Irvin, at UT, says the tree removal has been up to KUB. “It would be presumptuous of me to tell KUB what their policy ought to be, but certainly we’re in favor of maintaining and enhancing that tree canopy wherever one can,” he says. “We take great pains on our campus to manage those resources and cut trees only as a last resort.”

Wooded areas near bike paths will take a hit in I.C. King Park, where Bataille says the width of the clear-cutting has exceeded the county’s expectations.

Bataille says he has proposed tree-planting and improving bike trails when they are rebuilt, and KUB seems open to these suggestions. The project will destroy some old parking lots that were in bad shape anyway, but KUB will supply better new ones.

Kellogg says KUB has also been open to the idea of constructing a new bike trail in part of the right of way. This could be a type of skill-building track unusual in this area, where a mountain biker can reach speeds outside her comfort zone without the risk of hitting a tree 2 feet off the trail.

“It would allow [KUB] to still maintain access to their pipeline, but at the same time make a positive out of it,” Kellogg says.