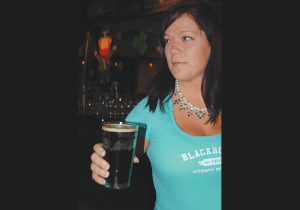 The Blackhorse Pub and Brewery is a bit like an English pub. The bar itself is made of hefty, gleaming wood, set off in low lighting, with a mirror behind a half-dozen taps. The neighbors from the mansions in nearby Sequoyah Hills sit on stools next to lawn guys and one or two women with careful make-up, most everyone in T-shirts or flannel shirts and well-worn jeans on this Sunday afternoon.

But I’m here for a very un-pub like experience, the mere mention of which would get me hooted out of one of Andy Capp’s hangouts. I’m sampling Blackhorse beer cocktails, where they mix one of their signature ales with ingredients like simple syrup or lime or Frangelico.

I’ve been directed to speak with bartender Jessica Stewart—she and manager Buffy Dove devoted one memorable lunch shift to creating the beer-cocktail menu.

“We just put stuff together, decided what tasted good,” Stewart says. “Towards the end, we both got a little toasty.”

Stewart came to bartending in that roundabout way that produces some of the best, starting as a server at the original Blackhorse, in Clarksville, in 2009, while studying elementary education at Austin Peay State University. When a bartender job came up, she learned how to bartend. And when the Clarksville outfit opened a second spot—its only offshoot—here in Knoxville, she came here. She’s got two other jobs, working Web tech for Whirlpool and also for Title Boxing Club off North Peters Road.

But she’s first and foremost a bartender. I can tell by the way her eyes light up when she describes shaking cocktails, in two shakers held together: “Really fast.” And she knows those born-to-bartend things, offering them up in that clear and friendly fashion so favored by winning contestants on Jeopardy (who often turn out to tend bar).

First thing she has to straighten me out on is the name. I’m thinking “wine-tails,” those fairly pretentious beverages that were the rage years back. I wrote about them once, including a centuries-old recipe for red wine and cream syllabub still being served in Colonial Williamsburg.

“Do we call these beer-tails?”

No, no. “We’ve haven’t ever made that nickname for them,” Stewart says, in a tone so diplomatic I fleetingly wish her fourth job was in politics.

Other fun facts about beer cocktails: They are not particularly low in alcohol. “When you’re using beer as a mixer, it adds more alcohol content. With the Matador, for example, you’re getting Patron and an ale in one drink.”

They don’t use ice. Just the chilled beer gets the temperature to the right spot.

“You’re trying to catch different tastes while incorporating beer as an ingredient,” Stewart says. “If someone liked bourbon, I might suggest the Weissen Sour with its bourbon and Blackhorse ale. For a girly drinker, the Cream Soda, which has Stoli Vanilla and Vanilla Cream Ale.”

For my taste, I already love the simple genius mix of Vanilla Cream Ale and Coal Miner Stout. I first sampled it at Brewers’ Jam 2013 at the hands of Stewart’s co-worker, who will be known for now as Local Poker Master Chris Estes. It’s a rush of crisp vanilla intertwined with a very cold spring-water sensation and just the lightest hint of toasted barley at the end.

Stewart’s favorite is the Sweet Red, a mix of Vanilla Cream Ale and Barnstormer Red. “It tastes like cereal,” she says. I’m guessing that’s a compliment, not a reference to Apple Jacks, and give it a gulp. It’s malty, not sweet as much as smooth, maybe with the tiniest hint of a Honey Crisp apple flavor in the finish.

I would have another any time.

I also try a Matador, wholesome and fresh with strawberry puree and fresh basil—not at all sticky. Stewart doesn’t recommend it for the home mixologist because grocery basil costs so much.

But she shares her Kiss o’ Honey recipe: Place a half-ounce of Hendrick’s Gin into a highball glass. Squeeze in the juice from half a lemon, add a tablespoon of honey. “Give it a medium stir, like you’d stir sugar into tea,” she says. Top with 12-14 ounces of Blackhorse Ale.

One last tip, one last smile: “If you pour it into the center of the glass instead, it will distribute more evenly.

“That’s how it tastes the best.”