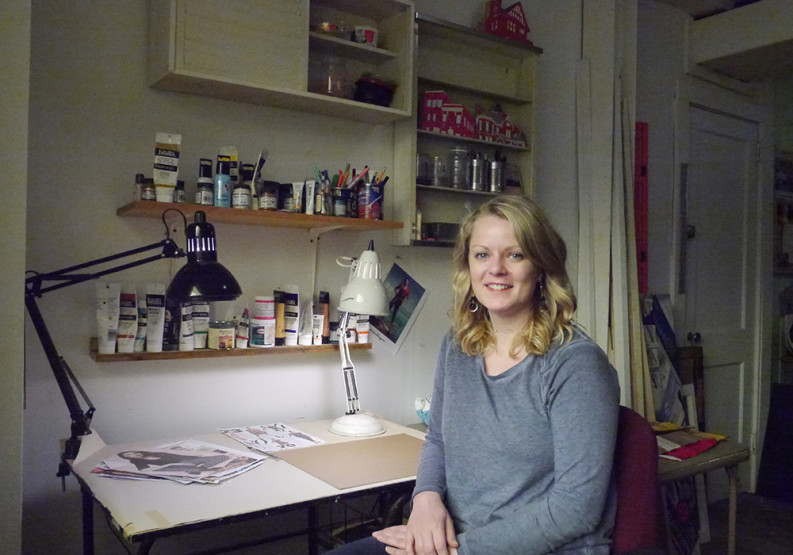 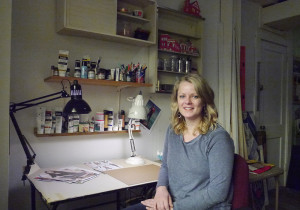 The work table in Beth Meadows’ studio is littered with the kitchen detritus of devoured groceries: a shiny Vigo rice box, a yellow Gevalia bag, and wisps of colored mesh baggies that once held some small, precious produce.

She hasn’t been gorging. Meadows is working on an upcoming art show in which she plans to layer food packaging into patterns that will dress her painted supermodels. Meadows is a fan of haute couture, following supermodels on Twitter and designers on Pinterest. Fashion and architecture make up a whole category of her paintings. But this is a new twist.

“I see the shallowness and materialism in fashion,” Meadows says. “I love fashion magazines, but I look at them and I feel I’m lacking in every way.” On the other hand, she says, she hates grocery shopping. Clothing supermodels in beautiful garbage demonstrates how it’s all packaging, all meant to manipulate the consumer (and, perhaps, turn women into a product to be consumed).

These works are slated for a show at Central Flats and Taps in April. Meadows’ work will also be featured at the April 3 grand opening of the Knox Heritage Art and Salvage Shop. The shop is a larger, relocated version of the Salvage Room, which sells materials salvaged from historic buildings. Meadows manages the shop and is overseeing renovation of the new building at 619 Broadway, which will include a gallery wall and participate in First Friday gallery openings.

Meadows has been an intern or employee with Knox Heritage since she graduated from the University of Tennessee in 2007 with a degree in studio art. She has often used material from the Salvage Room as her canvas. She is perhaps best known for her images of Mason jars painted on boards studded with nail holes and flaked with old paint.

“These historic building materials are so well-made and beautiful … but I’m seeing them in their demise,” Meadows says. “It’s really this tragic ending for them.” She likes mixing the salvaged pieces with images of fashion to demonstrate the fleeting nature of both.

Meadows, who hails from Memphis, sees her work as a meeting—sometimes a clash—of two worlds, one glamorous and modern, the other raw and unrefined. Some of her works, like salvaged-wood cutouts of her cat Juicy or of Knoxville landmark buildings, are obviously folk art. She says she would like to try some very large paintings modeled on Grandma Moses’ folk landscapes, but replacing the clapboard houses and villagers with mansions and supermodels.

Mashups are also common in her upcoming show at the Salvage Shop, which will include works previously displayed in a January show at the Emporium. Among them are glamorous fabrics in chipping wood frames and a series of paintings based on some of Meadows’ favorite movies, such as Emma and The Sound of Music. In each of these, she replaces the heroine with a supermodel.

“Those films take you back to a different time,” she says. “I’m kind of comparing it to what I fantasize about now. [These paintings are] talking about longing in women—if those longings are noble or fleeting, and whether they will actually foster contentment.”

Pattern, color and shape are part of what attracts Meadows to painting supermodels, swimming pools, and concert halls. The same elements of design also draw her to practical objects in the Tennessee landscape.

“The boiled-peanut handwritten signs on the side of the road intrigue me,” she says. “Do those people know how beautiful that sign is, or do they even think about it?” She has similar thoughts when passing the signs and shop windows on Magnolia Avenue.

Meadows sells her pieces at her shows, on Etsy, and at her website, withbearhands.com. That name comes from one of her whimsical paintings, in which a person with literal bear hands prepares to attack. She says she has a story in her head for almost all her narrative paintings, which feature often funny scenes like snapshots from a longer story—a girl entering a maze, teenagers drowning in a kitchen full of popcorn.

The painting of a bear roaring while he packages Mason jars helps express Meadows’ struggle to turn her art into a business.

“It’s like taming a wild animal,” she says, laughing affectionately at the bear. “He’s doing the best he can, but he’s having a moment.”