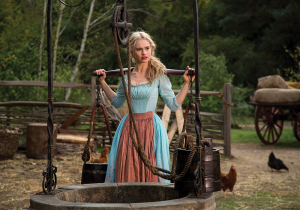 In this age of wholesale revisionism, there’s something that feels almost subversive about director Kenneth Branagh’s defiantly old-fashioned Cinderella. There are hardly any postmodern twists or deconstructed tropes in his sumptuous, surprisingly appealing take on one of the world’s best-known stories. As retellings go, this is about as straightforward as you can get—there’s a put-upon orphan, a scheming stepmother, a souped-up pumpkin, and so on, and everything falls into place with clockwork precision.

It’s so faithful to Disney’s 1950 animated version, in fact, that its very existence invites cynicism. However you wave the wand, it’s a blatant cash grab—it’s even packaged with a Frozen short that is carefully engineered to elicit spasms of glee from its target audience. But there’s one catch: This latest iteration of Cinderella is very, very good.

For starters, Branagh and screenwriter Chris Weitz approach the story with an earnestness that’s pretty hard to resist. Its sincerity is evident from the opening scene, front-loaded with butterflies and bluebirds. In one of the movie’s few and most notable deviations from its animated predecessor, Cinderella makes time to acquaint us with young Ella’s doomed parents (played by Ben Chaplin and Hayley Atwell). In a surprisingly lengthy preamble, the family lives in pastoral bliss until Ella’s mother falls ill and dies, leaving the girl and her father vulnerable to the eventual predations of Lady Tremaine (a magnificent, scene-stealing Cate Blanchett). Dolled up like a ’40s femme fatale, Tremaine saunters into the story with her doltish daughters in tow and relegates the grown-up Ella (Lily James) to a life of servitude and humiliation.

Ella is victimized, for sure, but she’s not content to be a victim. That’s the second, and best, tweak that Branagh’s film offers: a heroine with gumption, who actually gets to choose her prince before her prince chooses her. When she first encounters the absurdly handsome Kit (Richard Madden) in the forest, she doesn’t realize he’s a prince; she gives him a good talking-to about the ethics of hunting for sport before she sends him on his way. They’re smitten with one another and complications ensue, but nothing that an efficient—and awesomely bonkers—fairy godmother (Helena Bonham Carter) can’t sort out with a bit of the old bippity-boppity-boo.

As Disney princesses go, this version of Ella is one of the most likable of the bunch. Her mom’s deathbed advice—“Have courage and be kind”—is her guiding principle, and the movie lets her be both without becoming a caricature of either. Much credit goes to James, who’s charming enough to hold her own against a smoldering, seething Blanchett—no mean feat, especially when the latter pulls out all the stops.

Branagh’s greatest accomplishment with Cinderella, though, might lie in the film’s gorgeous visuals. This is grand, old-fashioned Hollywood filmmaking, and if you’re taken by that sort of thing, it deserves to be seen on the biggest screen you can find. The CGI is serviceable if ultimately forgettable, but the movie’s practical elements—its Oscar-baiting costumes, elaborate sets, and old-school cinematography—are entirely worth the ticket price. Branagh has a knack for making fairy-tale opulence seem more inviting than decadent, and that skill is on full display throughout Cinderella.

He’s also the guy who figured out how to put Thor on a movie screen without looking like a complete boob, and one can’t help wonder if it’s that quality, more than his skill as an adapter, that made Branagh a shoo-in for this gig. He puts an earnest shine on what could easily have been Cinderella’s most hackneyed element: the fairy-tale romance that blossoms between Ella and Kit. Again, it’s the same old story, but Branagh takes the time to develop their characters more than others have bothered. They aren’t just swept up in the machinations of an oft-told tale; rather, they’re capable young people who are just beginning to make their way in the world, and to take charge of their own fates.

Those little details make all the difference. Trite as the tale may be, Branagh and his cast make it nearly impossible not to root for the couple as they negotiate the obstacles that stand between them, both through magical agency and, more importantly, their own.