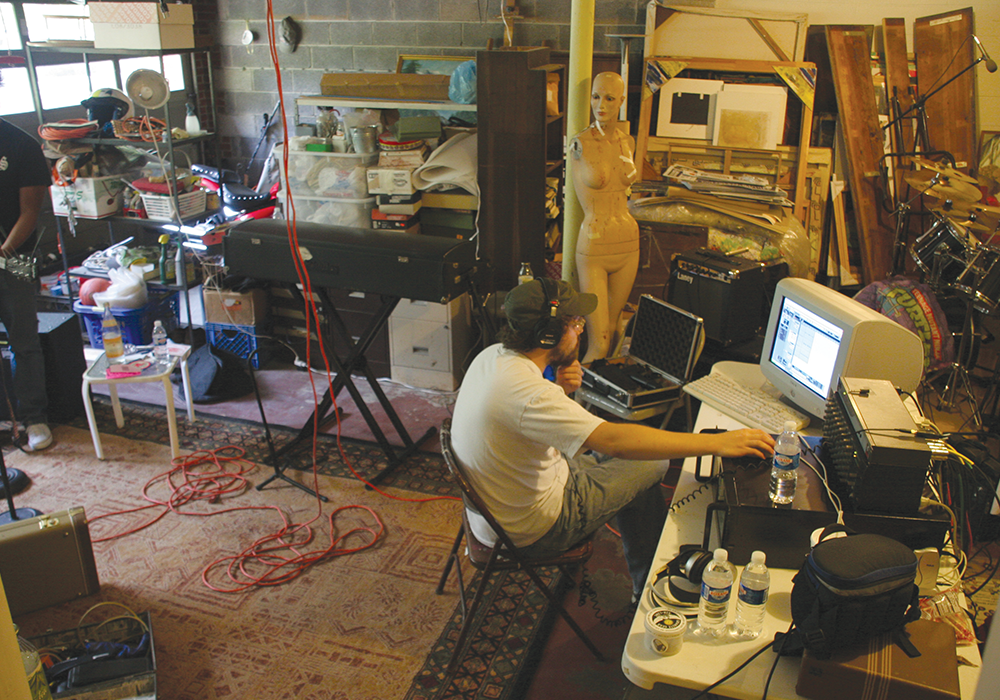 When it came time to choose an inaugural record for Retro Grade—a twice-monthly look at lost gems from Knoxville’s vast music scene—it was tempting to set the “lost” angle immediately aside in favor of a high(ish)-profile release, or at least a well-remembered group deeply rooted in local music before and since. The Diacon-Panthers’ self-released 2007 album Make It Feel Better is neither of those things; by the time they hit the creative stride documented here, college had split the band across the country, and the summer- and winter-break homecomings they continued over the next two or three years made for a limited, if enthusiastic, foothold in their hometown.

GUITARIST GREG GIVEN: We were kind of always a band in a long-distance relationship. Natan and I were in college at Reed College in Portland, Ore. Charlie was at Middlebury in Vermont, Jeremy at Berklee in Boston. So we really only played shows in the summers and over winter breaks. … We recorded [Make It Feel Better] in the basement garage at Natan’s parents’ house with Ryan Schaefer. The garage doubled as Natan’s mom’s art studio and storage area, so there was all sorts of stuff crowding the room, we just kind of set up our gear wherever there was space and used the adjoining laundry room and bathroom as an isolation booth for the amps. There was a really creepy mannequin splotched with red wax that held court over the proceedings.

SINGER GUITARIST NATAN DIACON-FURTADO: My amp, for example, was precariously placed on the toilet the whole session. I think it took a week to record.

PRODUCER RYAN SCHAEFER: I don’t know how exactly I first met them, but I remember seeing them play at Old City Java, back when Java still had shows. It was kind of messy on the outside, but there were really good songs underneath. I mean that as as a compliment—that’s how most of my favorite music works. I liked all of their stuff, but they played this one song that I later found out was called “Days of Wonder” that I thought was really great.

DRUMMER CHARLIE HENSCHEN: The idea was, there’s no way we can make this sound hi-fi, and it would sound boring and insipid if we went by the textbook and came out with something medium-fi, so let’s just go for as angular and noisy as possible. I remember eating absolutely silly quantities of Smarties, and it being very hot.

SCHAEFER: I’m not really sure why I thought I would be qualified to record another band at that time. Maybe they asked me? But I’m glad we have a record of it, because I really like those songs. When I would record Greg or Jeremy’s parts, I think that was probably the first time I had ever recorded anybody who was actually good at their instrument in any kind of technical way. I was just used to recording Royal Bangs stuff—it would take us 15 takes to do anything at that time. There were some fun recording moments, calibrating weird feedback to come in at the right time, glitchy computer effects, stuff like that. Maybe they would remember it differently, but other than a mildly heated debate about the use of splash cymbals (not in favor, for the record), I remember it being pretty pleasant and interesting to work on.

GREG GIVEN: It must have taken me four or five takes to get the “Minor Tiger” guitar solo right. After the third or fourth take, Ryan said to me, “Greg, you’re way better at guitar than Natan. But try playing this solo like Natan would play it, if he were as good at guitar as you are.” The next take, I slopped around as much as possible, ended it with a chromatic run up the neck and a wild bend when I hit the last fret. As soon as I finished, Ryan took off his headphones. “I can’t in good conscience not use that,” he said.

DIACON-FURTADO: Ryan convinced me to not sing like an asshole, which I still appreciate.

GREG GIVEN: We released it on CD-Rs—I think we paid extra for the CD-Rs that were silver instead of green, so that they looked like real CDs—in sleeves handmade out of heavy card stock by Natan’s mom. I think we made the stickers for the exterior label and the liner notes at Kinko’s.

HENSCHEN: Natan did all the artwork, which was very simple and DIY but still elegant and managing to look like a real album cover. I remember scrambling to get everything together and packaged before our album release show. And I remember being super-amped when someone from like Oklahoma bought it on CD Baby.

BASSIST/KEYBOARDIST JEREMY LEE GIVEN: I don’t think that we really had any real instincts to promote it. I was pleased with the reception of it and I was always proud of the work we put into it and the way that Ryan made it sound. … The shows that we played at the Pilot Light were clear hometown highlights, but I’ll forever remember the few short legs of touring that we did. I remember being excited to play the Knitting Factory in Manhattan, but then realizing upon arrival that there were three venues inside the complex and we played the tiny basement club. Lugging a Fender Rhodes down three flights of narrow stairs to play for five people really underlined the spirit of New York gigging for me at an early age.

GREG GIVEN: Summer of 2008, we got an offer to record for free at Music Row Studios in Maryville. A super-nice guy named Scott Rader out there liked Make It Feel Better and got in touch. The upshot of these sessions was that the studio was awesome and professional—he had a great live room, recorded us straight to tape, etc. The downside was that our preparation for the sessions wasn’t great, so we showed up more with ideas for songs than fully fleshed out and articulated pieces. So the result isn’t as great as it could have been. But it has its moments. Later that year we released the EP as Ride Again. I was really proud of the title and album art, even if the recordings weren’t quite up to muster. …

After Natan, Charlie, and I graduated, Natan moved to New York, I moved to Boston, and Charlie moved to Seattle. All of us got jobs, made it to Knoxville less often. We never formally broke up. We just have never been in the same place all at the same time again since our last show. At the end of that last show we all got together on the stage, before loading our gear off, and agreed that this wouldn’t be the last time. I’m still hoping that it wasn’t.

DIACON-FURTADO: I still think its really solid. I am infinitely embarrassed by my singing on the record, for probably no reason, but on a couple songs I listen to them and when I do certain vocal things, I think, really? I still think the recording and production by Ryan is fantastic, very raw and techy at the same time.

HENSCHEN: Those two recordings together are the best artistic projects I’ve been a part of, by a lot. These songs still have that same emotional resonance for me. Personally, Make It Feel Better represents me coming into my own as a musician. Even if I would play it differently now, this was when I started thinking about my role in songs with a bit more intelligence.

JEREMY LEE GIVEN: I still listen to it and I still feel good when I do. I think my favorite thing is how Ryan made us sound way more badass than we actually were. I always look at Make It Feel Better as my first real LP that I was part of, and it feels like such a solid foundation for what I’m doing now.

Natan Diacon-Furtado is a designer at an architecture studio in New Orleans. Charlie Henschen is pursuing his master’s degree in winemaking at the University of California, Davis. Greg Given is working on a PhD in the Study of Religion at Harvard University. Jeremy Lee Given is a professional composer living in Boston and plays with several artists including his own band ABADABAD.