Who's Next? Romance Takes a Nasty Turn in 'It Follows' - The Knoxville Mercury 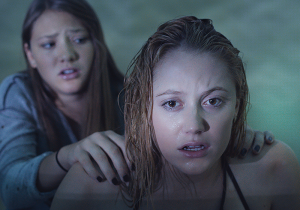 For as long as I can remember, my nightmares have been populated by entities whose only goal is to scare the hell out of me. They never try to harm me physically, but the fear they instill, often from a mere arm’s length away, is just as torturous as any bodily injury they could mete out.

I can safely report that no film in recent years has channeled those night terrors as faithfully and effectively as It Follows. Writer/director David Robert Mitchell’s sophomore feature is smart, stylish, and, above all, genuinely frightening; it manipulates familiar horror tropes and twists them into something that feels at once classic and new. It unravels considerably in its final third, but its first hour reaches such lofty heights that its disappointing finale is forgivable.

Nineteen-year-old Jay (Maika Monroe) is just trying to navigate the transition from adolescence to adulthood when she falls for Hugh (Jake Weary). The two have sex in Hugh’s car, but the seemingly sweet encounter ends with Jay tied to a chair in an abandoned factory, where Hugh spins a far-fetched story about a sexually transmitted curse that he’s passed on to her: From now on, Jay will be stalked by a slow-moving but relentless entity that can assume any shape it pleases. He lays out a few ground rules—never enter a room with only one exit, never let it touch you, transfer it to someone else via sexy shenanigans as soon as possible—then offers terrifying proof of the thing’s existence before depositing a traumatized Jay in front of her home and disappearing into the night. The thing soon begins its single-minded pursuit, terrorizing Jay at school, at home, and eventually through the blighted streets and crumbling buildings of nearby Detroit.

It’s tempting to view It Follows as a cautionary tale extolling the virtues of teen abstinence, but it’s far more interesting than that. For Jay and her admirers, including nerdy Paul (Keir Gilchrist) and cool guy Greg (Daniel Zovatto), sex is both a death sentence and a reprieve. They’re all caught in a palpable, post-adolescent malaise that might not be all that preferable to being stalked by a sex demon, but that’s probably not why Jay’s friends line up to relieve her of the curse. The only way to end the torment is to sleep with someone else, thus transferring the curse to a new victim until they, in turn, pass it on to a future partner. If the demon manages to kill its prey, though, the curse reverts to whoever infected the person it’s just murdered.

If those sound like the arbitrary rules of a children’s game, that’s probably intentional.

Mitchell resists the urge to explain his monster, giving his film the eerie feel of an urban legend. Its timeline is purposely screwy—clunky TVs are always tuned to black-and-white sci-fi shows, one of its teen characters reads Dostoevsky on an e-reader reminiscent of a 1960s makeup compact, and contemporary pop-culture references are all but nonexistent. The nameless, protean menace has no trademark mask or horrific backstory; it seems conjured from the thin air of suburbia and exists only to stalk and murder. We see the gruesome aftermath of its kills, but the onscreen violence is minimal. Mitchell is more concerned with what happens before the monster catches up to its targets, and those stalking sequences are chilling and almost unbearably suspenseful. The characters are likeable if not exceptionally well developed, and they get a big boost from naturalistic performances by a largely unknown cast.

The film’s most obvious antecedent might be A Nightmare on Elm Street, but Mitchell takes more cues from John Carpenter’s early output and other ’70s genre films than from Wes Craven’s seminal suburban horror opus and the wave of imitators it inspired. Working with cinematographer Mike Gioulakis, he proves himself to be a gifted widescreen stylist, eschewing quick cuts and shaky, handheld camera work in favor of long takes, prowling tracking shots, and unsettling 360-degree pans. Even the jump scares are measured and well timed.

Though it culminates in a baffling third-act set piece that feels like it was spliced in from another, lesser movie, It Follows gets nearly everything else right. It isn’t the scariest film I’ve seen lately—that distinction still belongs to Australia’s The Babadook—but it’s a close second.