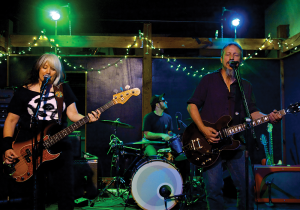 Tim and Susan Bauer Lee don’t do anything halfway. Since moving to Knoxville around 2000, they’ve become the local music scene’s most prominent power couple; they’ve played with nearly everybody else in town at one point or another and appeared on dozens of local records. They’ll pitch in at any fundraiser. And they’ve still managed to release four full-lengths in nine years with the Tim Lee 3 (not to mention Tim’s three solo albums before that, plus a bunch of EPs and live recordings).

So when they plan an album-release show, it’s never quite as simple as just directing the audience to the merch table. For the new 33 1/3—named after, obviously, the speed at which LPs rotate on a turntable and, not so obviously, the fact that the couple has been married for 33 years and four months—they teamed up earlier this month with local guitarist/songwriter Kevin Abernathy, who also just released his own new disc, for a gig at Scruffy City Hall. And that’s not all—the Lees were also dropping the debut EP from their duo side project, Bark, and a brand-new TL3 live album, recorded in Boston in November.

33 1/3 is, like its predecessors, Raucous Americanus (2010) and Devil’s Rope (2013), full of inventive, melodic guitar rock with pop instincts and bar-band muscle. (Some of the credit for that goes to drummer Chris Bratta, who seems to have settled into his seat permanently. He’s not a showy drummer, but he manages an admirable amount of both power and agility.) There are hints of L.A.’s Paisley Underground, early R.E.M., X, and the Blasters—you’ll occasionally catch a ZZ Top tone from Tim, even. The best development is Susan’s emergence as the band’s main voice—she sings lead on most of the tracks here, after sharing equal time with Tim on the previous two albums. A collection of first-rate songs, performed with confidence and charm.

Bark, on the other hand, with Tim on bass and guitar and Susan on drums, sounds like a side project. An interesting one—the mostly bass-and-drums arrangements, embellished with some economical guitar lines, sound sort of like Joy Division playing White Stripes songs. Overall, though, it’s a slight exercise that just highlights how solid 33 1/3 is.