A Winter Hike in Knoxville’s Urban Wilderness - The Knoxville Mercury 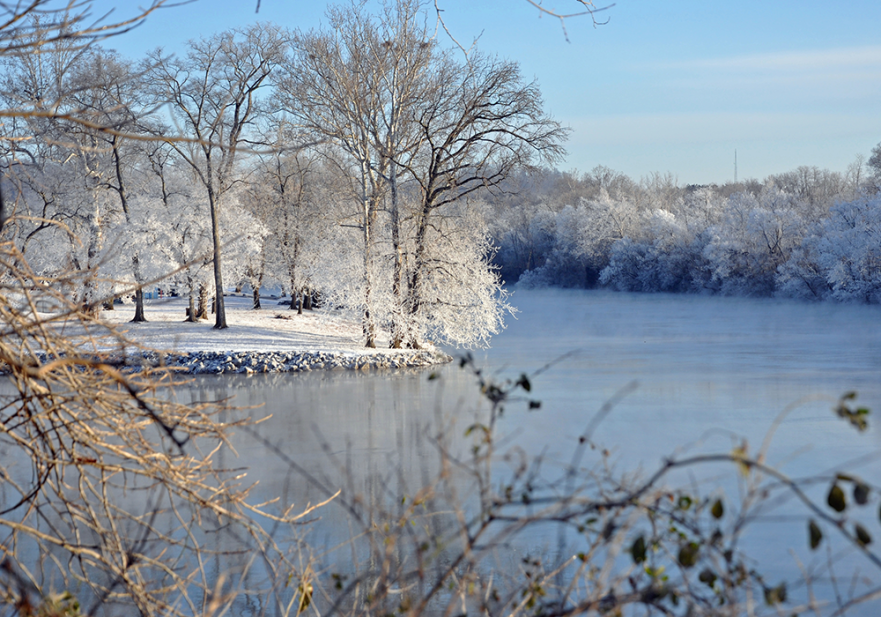 The trick to enduring a long winter is to embrace it, to go out and confront its winds and vapors and crusty frozen surfaces. There are no insects, no serpents, no poison ivy and no sweaty crowds in the beautiful places. Cold weather spurs you forward, makes you feel like moving, and the wild presents its beauty without adornment, revealing its architecture in stark contrasts of shadow and light. You can see a long way through air that seems cleaner, clearer.

For these reasons, I picked the coldest day of 2015 to take a hike on the South Loop Trail in the Forks of the River Wildlife Management Area (WMA), into the heart of Knoxville’s Urban Wilderness. Winter storm Octavia had blown through post-Valentine’s Day, and the Polar Vortex had infiltrated from Siberia, dropping the temperature to 3 degrees at 7 a.m. I thought the trails would be untracked by humans, the wildlife unsuspecting. I imagined bucks leaping across my path; dodging, sprinting rabbits; maybe a fox or a bobcat too drowsy to dodge my camera lens.

At the trailhead for the WMA, somebody had parked a red pickup. Abandoned, I thought, a big fancy truck that could not withstand the cold. Surely, there was no one out there ahead of me.

As I approached the frozen swamp on Wyatt Lane, five big booms shattered the silence. I couldn’t see the hunter, but he couldn’t have been more than 50 yards away in one of the dove fields. It was not dove season, I knew, but as I checked later, there were plenty of other animals in season, including armadillo, beaver, coyote, groundhog, and striped skunk, species you could hunt any time of year, without limits. The season for fox, mink, muskrat, river otter, spotted skunk, bobcat, squirrel, rabbit, grouse, snipe and crow ended on Feb. 28, in just a few days. For some reason, I preferred to think he was shooting at crow; at least he would be aiming in the air, and I imagined crow clever enough to avoid buckshot. (Non-hunters must stay on designated main trails on certain days: See outdoorknoxville.com/urban-wilderness near the bottom of page.)

I veered away from the killing ground toward the South Loop Trail that runs along the French Broad River on a steep bluff. I wouldn’t be sneaking up on anything. The snow was a hard crust about an inch thick with a shell of thick ice beneath it. The crunching sound of my steps reverberated across the fields and through the thickets, and pushing the ice-laden cedar and privet to clear the path sounded like tinkling chandeliers and spirits that shushed me as I shouldered them out of the way.

Once I got on a trail called Dozer, I noticed something completely unexpected. Other humans had come this way, not just on foot but on bicycles. What cyclist was hardcore enough to be out here today? I decided it would be my mission to track them down, the two cyclists and the heavy-booted hiker who shadowed them. How dare they hike and bike in single-digit temperatures? The idea that someone had preceded me and spooked the wildlife on such an inhospitable day was galling. 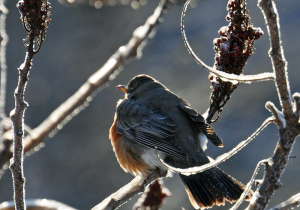 There’s something precious about bright sun on such a cold day, and as it rose above the dam-generated current of the French Broad and stirred ghostly vapors, I slowed my pace and imagined that the wildlife, curled up somewhere trying to stay warm, would arise and pose for me. But I was haunted by one species who seemed to be flitting about everywhere, a bird so common I could look out any window at home and spot a dozen: the cursed robin!

I started seeing ruins of houses and then occupied houses. At a parking area I consulted a kiosk map and decided to make a smaller loop back to the killing zone on Groundhog. I walked up Burnett Creek Road past a house which had two or three “No Trespassing” signs and a “Beware of the Dog” sign. Out front I was greeted by a pygmy snowman who had just finished a Mountain Dew. Perhaps this return to civilization disoriented me because instead of Groundhog I turned onto Lost Chromosome, still tracking the twin bike treads, which had continued, without faltering, for the three miles or so I’d hiked. Who were these guys?

I determined that I needed to backtrack. Past the forbidden house and snowman sentinel, I walked again back to the actual map at the kiosk. I was aware of looking suspicious in my canvas military surplus parka with fur-rimmed hood. I’d have to walk past the house for a third time to find Groundhog, so I decided not to tempt the slumbering dog and returned to Dozer, the way I had come, and turned away from the river toward Groundhog, and other trails named Timber Doodle, Southside, and Coon.

After I crossed a creek or two and blundered down the slippery slopes of these more narrow trails, I began to ponder the term “Urban Wilderness.” I hadn’t really seen anything that I’d considered urban except maybe the factory on Pickel Island. Urban implied a concentration of humans, none of which I’d actually seen. Yet I knew I was only a mile or so from a nature center, and a couple of miles as the crow flies from downtown Knoxville, the Sunsphere and TVA’s highrise, not to mention monumental Neyland Stadium.

Was this wilderness? Officially designated wilderness areas took over an hour’s drive from my house in Maryville: Gee Creek way down 411 South near the Hiwassee River or Citico through a maze of backroads in Monroe County or over the Tail of the Dragon (Highway 129) to Joyce Kilmer Slickrock above Calderwood Lake. I’d bushwacked these places on- and off-trail and rock-hopped up creeks that poured whitewater from steep ridges, yet with the snow and the ice and the extreme temperatures, this urban nature didn’t seem that different. I hadn’t seen any litter, though it might have been covered up, and as I’d experienced in officially designated wilderness, the wildlife had room enough to make themselves scarce from trails and camera-happy tourists like me.

There was much more here than you could hike or bike in a day, and it was big enough, at over 1,000 acres, for plenty of humans to share in activities that had minimal impact. I’d read that places like this in South Knoxville were unattractive to developers because of the rugged terrain, the ravines and steep bluffs and porous karst. That’s great: Do we really need another cluster of condos, a strip mall or a marina? 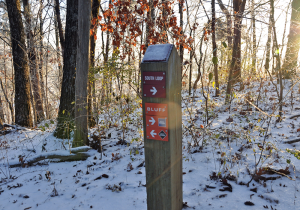 After a few more wrong turns, I found my way back to the swamp. The hunter was still firing away, and the crows were calling—mocking him, I hoped, just out of his range. But I did not begrudge the hunter his use of the wilderness, and I hoped the hardcore bikers had a safe loop journey. I had to admire the fact that people were using these trails even in the least hospitable conditions. This gave me optimism for the possibility of groups like the Legacy Parks Foundation expanding and protecting areas like this, so much more vital for our mental and physical health than another Walmart.